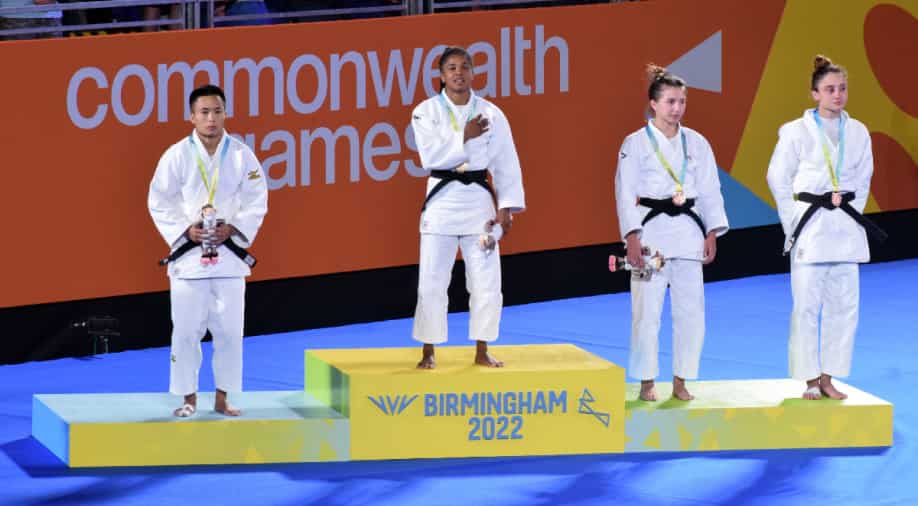 India's Sushila Devi and Vijay Kumar Yadav clinched silver and bronze medals respectively in judo in their respective categories at the Commonwealth Games 2022.

Indian judokas L Shushila Devi and Vijay Kumar Yadav signed off with a silver and a bronze medal in women's 48kg and men's 60kg respectively at the Commonwealth Games here on Monday. The 27-year-old Shushila fought hard before losing the final via 'Waza-Ari' in the 4.25-minute final against South Africa's Michaela Whitebooi, while Yadav dished out a dominating show to take down Petros Christodoulides of Cyprus with a 'Ippon' in the bronze medal match.

For Shushila, it was her second silver medal at the showpiece event. She had finished runners-up at the 2014 Glasgow games as well. A sub-inspector with Manipur Police, Shushila had progressed to the final, beating Priscilla Morand of Mauritius. She had beaten Harriet Bonface of Malawi on way to her quarterfinals earlier in the day.

The 26-year-old Yadav, on the other hand, produced a superlative performance as he pounced on the mistake of his opponent and pinned him down for 10 seconds to end the contest in just 58 seconds.

Ippon is a move in which a contestant throws his opponent to the mat with considerable force and speed so that the opponent lands on his back. An ippon is also awarded when a contestant immobilizes his opponent with a grappling hold-down for 20 seconds, or when an opponent gives up.

Yadav, who has won the Commonwealth Championships in 2018 and 2019, had lost to Joshua Katz of Australia in the quarterfinal, but he produced a superb performance in 60kg repechage to advance to the bronze medal match with a win by 'Waza Ari' over Dylon Munro of Scotland.

A 'waza-ari' is awarded after a player throws his opponent with control and accuracy, but not to the extent of an ippon.
Jasleen Singh Saini will also fight for a bronze medal after losing the men's 66kg semifinal to Scotland's Finlay Allan.

Saini, who sailed into the semifinals earlier in the day, lost after the Scot performed an 'Ippon' in a match that lasted a little less than two and half minutes. The 24-year-old Saini, however, has a chance to earn a podium finish as he will compete in the bronze medal play-off against Australian Nathan Katz later tonight.

Suchika Tariyal has already reached the bronze medal round after defeating Donne Breytenbach of South Africa in the women's 57kg repechage. India had won two silver and two bronze at the Glasgow 2014, their best ever show in judo.