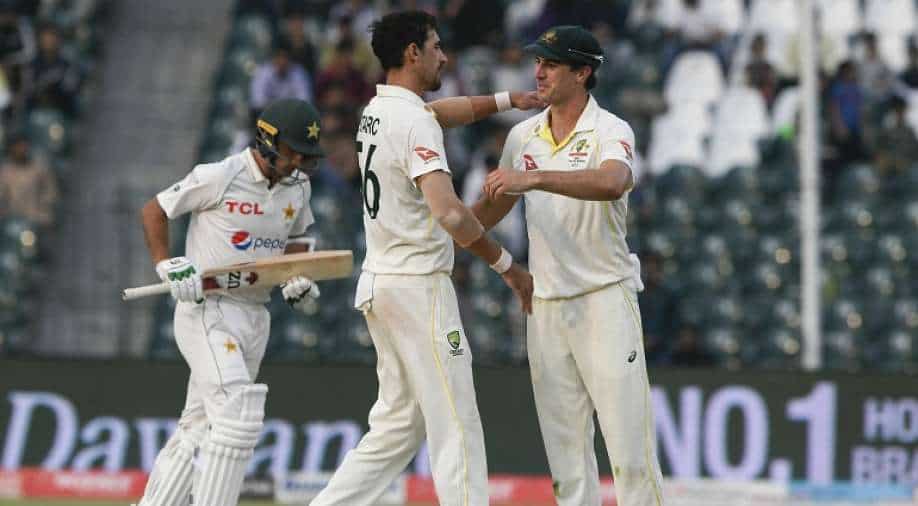 Pakistan was 268 all out against the persistent pace of Australia captain Pat Cummins and impeccable reverse swing of Mitchell Starc to concede a massive 123-run lead on Wednesday in the third and final test.

Pakistan was 268 all out against the persistent pace of Australia captain Pat Cummins and impeccable reverse swing of Mitchell Starc to concede a massive 123-run lead on Wednesday in the third and final test.

In a sensational collapse after tea on Day 3, Pakistan lost seven wickets for 41 runs (the last four wickets without adding a run) as Cummins finished with 5-56 and Starc took 4-36.

Australia had stretched its lead to 134 runs by reaching 11-0 by stumps with Usman Khawaja not out on 7 and David Warner unbeaten on 4.

In-form opening batter Abdullah Shafique (81) and veteran Azhar Ali (78) had carried Pakistan to 170-1 and denied Australia a breakthrough in the first session after resuming on 90-1 before the visitors took control of the series-deciding test.

Nathan Lyon (1-95), who dried up the runs with his marathon spell of 30 overs on Day 3, provided the opening when he found the outside edge of Shafique's bat after lunch to end a patient 150-run stand.

Shafique's prolific run in the series has seen the opening batter score his maiden test hundred in the drawn first test in Rawalpindi before his patient 96 in Karachi led Pakistan to force a draw.

Shafique defied Australia with yet another patient knock off 228 balls which featured 11 fours before Lyon struck in the fifth over after lunch and successfully overturned umpire Aleem Dar's not out decision through a television referral.

With the second new ball only seven overs old, Cummins took a spectacular return catch to dismiss Azhar in his homecoming test match as Pakistan was restricted at 227-3 at tea.

Azhar, playing in his 94th test match but for the first time in his hometown of Lahore, became the fifth Pakistani batter to complete 7,000 test runs when he reached 74 by sweeping hard at Lyon to deep square leg for a single.

But Pakistan folded against Cummins and Starc after tea, losing the last six wickets off 40 balls.

Starc, who bowled only two overs with the second new ball, returned in the last session and knocked back the off stumps of Fawad Alam (13) and Mohammad Rizwan (1) with Pakistan batters struggling to cope with the reverse swing.

Cummins hurried the collapse by claiming the wickets of Sajid Khan, Nauman Ali and Hasan Ali within two overs to register his first five-wicket haul against Pakistan in a test match.

Starc wrapped up Pakistan's innings by trapping Babar leg before wicket off a delivery which shaped into the skipper and then clean bowled No. 11 batter Naseem Shah off a searing full pitched delivery.