Copa America: Brazil have three goals denied by VAR in draw with Venezuela 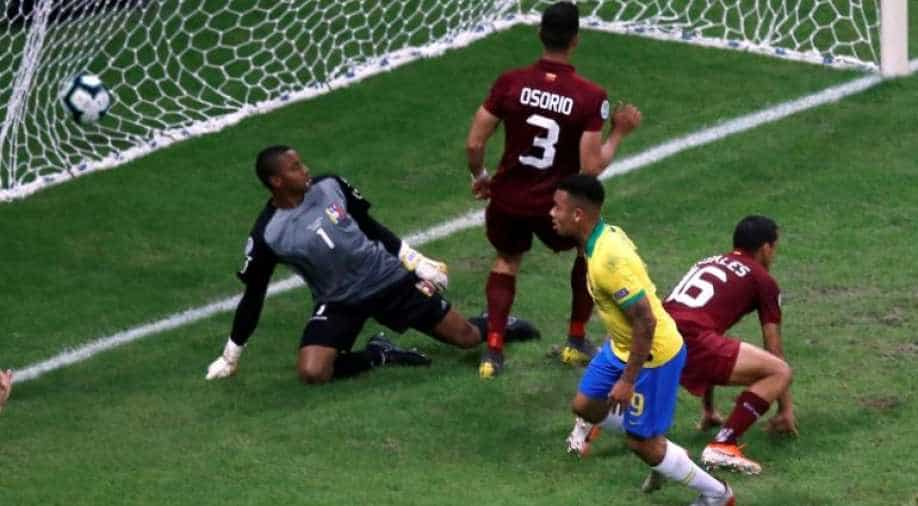 Brazil's Gabriel Jesus scoring a goal that was disallowed after a VAR review. Photograph:( Reuters )

After the game, Venezuela coach Rafael Dudamel sang the praises of the technology, which has saved his side on four occasions so far

The Video Assistant Referee (VAR) rode to Venezuela's rescue once again at the Copa America on Tuesday, denying hosts Brazil two goals in a surprise 0-0 draw in Group A.

Brazil, who had another goal chopped off by the referee, were left to rue a series of missed chances in another sub-par performance that did little to excite the home fans.

Roberto Firmino had a goal disallowed late in the first half after the referee awarded a foul against the hosts, before substitute Gabriel Jesus found the net on the hour mark only for a VAR review to deem Firmino offside in the build-up.

Philippe Coutinho looked to have found the winner when he netted from close range but VAR intervened again, this time for Firmino appearing to handle the ball before it dropped to Coutinho.

After the game, Venezuela coach Rafael Dudamel sang the praises of the technology, which has saved his side on four occasions so far. Peru were also denied two goals by VAR in their opening 0-0 draw with the Venezuelans.

"We played an almost perfect game against a team of brilliant individuals. Brazil put us to the test but the team understood what needed to be done and remembered what tactics we needed to deploy," he told reporters.

"This is a historic result for us," Dudamel added.

Brazil lead the group on four points ahead of Peru, who beat Bolivia 3-1 earlier in the day and also have four points.

Brazil meet Peru in their final group game on Saturday with both sides needing only a draw to seal their place in the quarter-finals. Venezuela have two points while Bolivia are without a point, with the two facing each other on Saturday.

The top two in each group are guaranteed a place in the last eight, along with the two highest-ranked teams finishing third.

Brazil had faced criticism from fans for their slow start to their opening game against Bolivia, which they went on to win 3-0, and while they made a stronger start here they failed to take the numerous chances that came their way.

David Neres and Firmino missed the target and Richarlison was thwarted by Venezuela goalkeeper Wuilker Farinez early on, while substitute Jesus and defender Filipe Luis both wasted chances to win the game after the interval.

The final whistle was greeted by loud boos from the unimpressed 39,000 supporters at the Arena Fonte Nova, the hosts again failing to attract a full house after underselling the opener, with over 10,000 seats left empty this time.

Brazil defender Thiago Silva said his side did not deserve the flak they were getting.

"In the second half, they (Venezuela) practically never got out their own area. We didn't win because of small details. But when you don't score goals it looks like everything is wrong," he said.

But coach Tite could understand the fans' frustrations.

"We have to understand the supporters, they want to see goals and if I had been in the crowd I also would have wanted to boo us," Tite said.