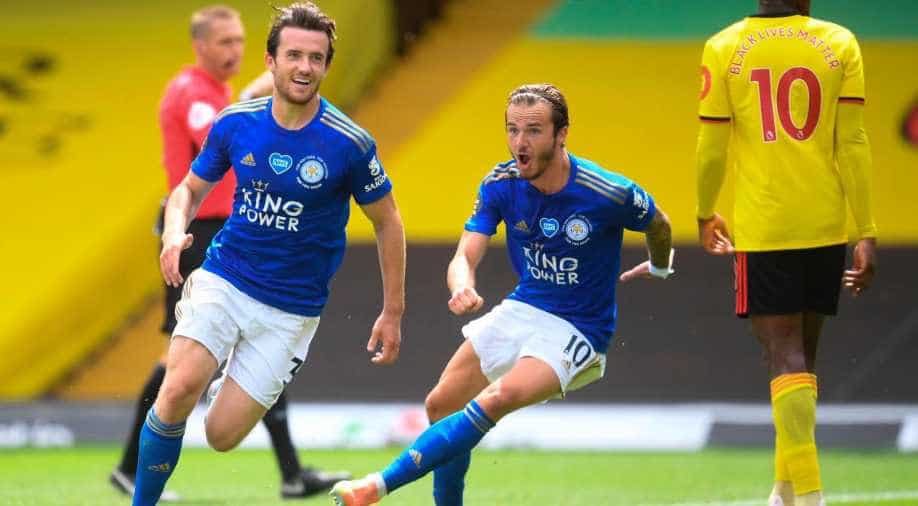 England left-back Ben Chilwell on Wednesday became Chelsea's third high-profile signing of the summer, leaving Leicester for a fee reported to be around £50 million ($66 million).

England left-back Ben Chilwell on Wednesday became Chelsea's third high-profile signing of the summer, leaving Leicester for a fee reported to be around £50 million ($66 million).

Chilwell's arrival at Stamford Bridge on a five-year deal follows the signings of Hakim Ziyech and Timo Werner from Ajax and RB Leipzig, with more business expected before the transfer window closes.

While neither Chelsea nor Leicester officially disclosed the sum paid for Chilwell, the Foxes said on their website it was "one of the largest transfer fees ever received" by the club.

"I am delighted to be joining Chelsea at this very exciting time for the club," 23-year-old Chilwell said on Chelsea's website.

"I'm looking forward to being a part of this young, dynamic squad led by Frank Lampard as we challenge for honours next season."

Leicester academy product Chilwell, who has 11 England caps, made his debut for the Foxes in October 2015 and made 123 appearances for the club.

"Ben leaves with the best wishes of everyone at Leicester City, and the club would like to thank him for his contribution to an exciting period for the team and its fans as they look forward to another season of European football," the Foxes said in a statement.

Chelsea sealed fourth place and a Champions League spot at the expense of Leicester on the final day of the Premier League season in July.

Chelsea director Marina Granovskaia said: "We are very pleased to have completed our third addition to our exciting squad for the coming season.

"Ben brings plenty of top-level experience playing in the Premier League, Champions League and at international level, despite his young age."

Chelsea have been heavily linked with a swoop for PSG's veteran Brazil defender Thiago Silva while Bayer Leverkusen's Kai Havertz is still in line to make the switch to Stamford Bridge.

The club have also been considering a number of goalkeeping options, with Ajax's Andre Onana and Burnley's Nick Pope both linked with a move to London.

Owner Roman Abramovich's staunch backing has put Chelsea in a strong position in the transfer market, with the club able to offset the effects of the coronavirus better than many other clubs.