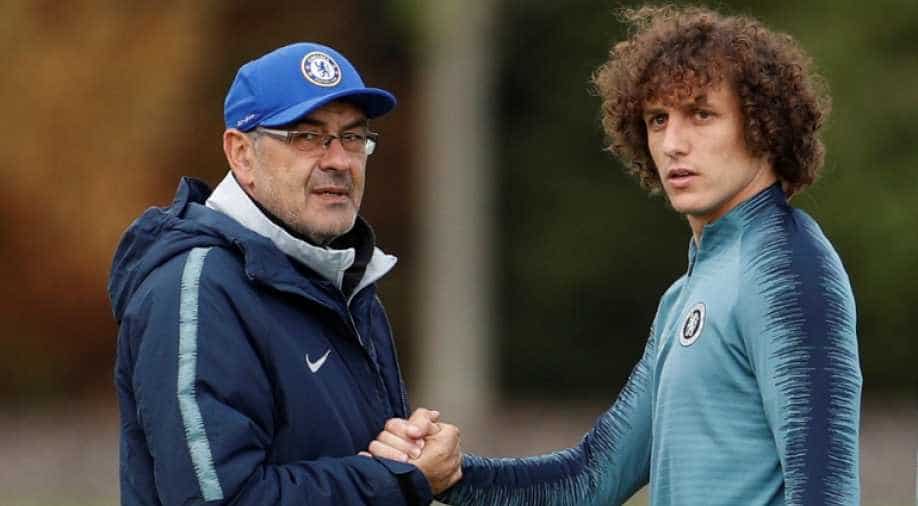 Chelsea coach Maurizio Sarri, whose future at Stamford Bridge is in question, stomped away from a training session before Wednesday's Europa League final, visibly angry as he threw his hat to the ground and kicked it.

Video of the incident which took place late on Tuesday showed Sarri exchanging words with defender David Luiz after a robust challenge involving the Brazilian and Argentine striker Gonzalo Higuain.

Sarri, who immediately before the training session had told reporters that he loved his players, was then seen leaving the field along with other staff and team members, tossing his cap to the ground and kicking it in the air.

A Chelsea spokesman said Sarri was frustrated at the media's presence at the end of the session at Baku's Olympic Stadium, where the team is due to take on London rivals Arsenal on Wednesday.

"Maurizio's frustration displayed at the end of the training was not related to any of his players, but was due to not being able to practise set-plays in the final 15 minutes of the hour-long training session as it remained open to media," the spokesman said.

Maurizio Sarri got angry during training in Baku when his team was not allowed to practice set-pieces in the final 15 minutes of an hour long session.#CFC #CHEARS pic.twitter.com/gWei4HeYfV

Sarri, who has had an up-and-down first season in London, has displayed flashes of anger on previous occasions while in charge of Chelsea, including in the League Cup final in February when goalkeeper Kepa Arrizabalaga seemed to refuse to be substituted.

Sarri was sent to the stands by a referee in April after becoming embroiled in a scuffle among players of Chelsea and Burnley in a Premier League match.

Asked on Tuesday about media reports that he is close to a return to a coaching job in his native Italy, Sarri said he loved his players and that would be part of his decision about his future.