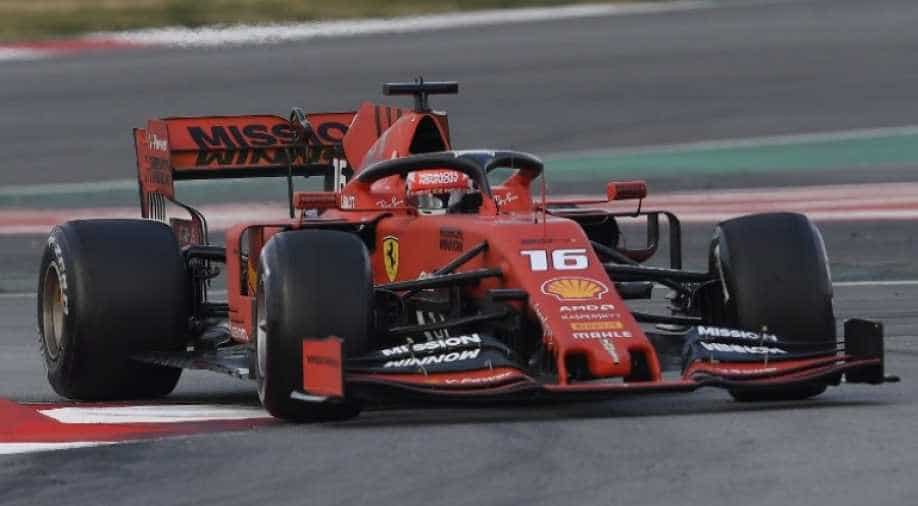 After teammate Sebastian Vettel led the way on Monday with the fastest time and most laps, Kimi Raikkonen's 21-year-old replacement slotted in seamlessly with a time not far off the German's best.

New recruit Charles Leclerc kept Ferrari on top of the timesheets with a full race distance before lunchtime on the second day of Formula One's pre-season testing in Spain on Tuesday.

After teammate Sebastian Vettel led the way on Monday with the fastest time and most laps, Kimi Raikkonen's 21-year-old replacement slotted in seamlessly with a time not far off the German's best.

The Monegasque produced a best time of one minute 18.247 seconds and did 73 laps, compared with Vettel's Monday 1:18.161 and 72 laps, in partially cloudy conditions and an ambient temperature of 14 degrees Celsius.

Five times world champion Lewis Hamilton, working through the Mercedes testing programme, did one more lap than Leclerc however.

Ferrari's times have been quicker than anything from last year's weather-affected first four-day test at the Circuit de Catalunya.

Rule changes, with new aerodynamic regulations, were expected to make the cars around 1.5 seconds a lap slower. But the evidence so far has been that much of the lost time has been regained.

By the time the season starts in Australia on March 17 cars can be expected to be going even faster, but Pirelli's F1 tyre boss Mario Isola cautioned that the picture might be distorted.

He said the asphalt had been new for testing last year, with a very smooth surface that had evolved further.

"I believe the influence of the Tarmac is higher, and the (warmer) temperature is playing a big effect. We know that," he told reporters.

Ferrari-powered Haas were second fastest, with Denmark's Kevin Magnussen taking his turn and producing a best lap of 1:19.234.

Alfa Romeo were third with Italian newcomer Antonio Giovinazzi taking over from Raikkonen who tested on Monday and using harder tyres than others.

In terms of mileage, Red Bull did the third most with Frenchman Pierre Gasly putting in 69 laps in another strong showing for the new partnership with Honda.

Australian Daniel Ricciardo, who has joined Renault from Red Bull, did the least laps of the morning (28) but that was due to his rear wing flying off at speed.

He returned to the pits with the Renault engineers setting to work.

"On-track fun for Daniel. We're testing his reaction skills. They're good," the team said jokingly on Twitter. "Car and driver are back in the garage. Rear-wing assessing is in full flow."

Williams were again absent, with the team hoping to get their car to Barcelona for Wednesday's third day amid speculation that senior heads could roll as a result of the delay.