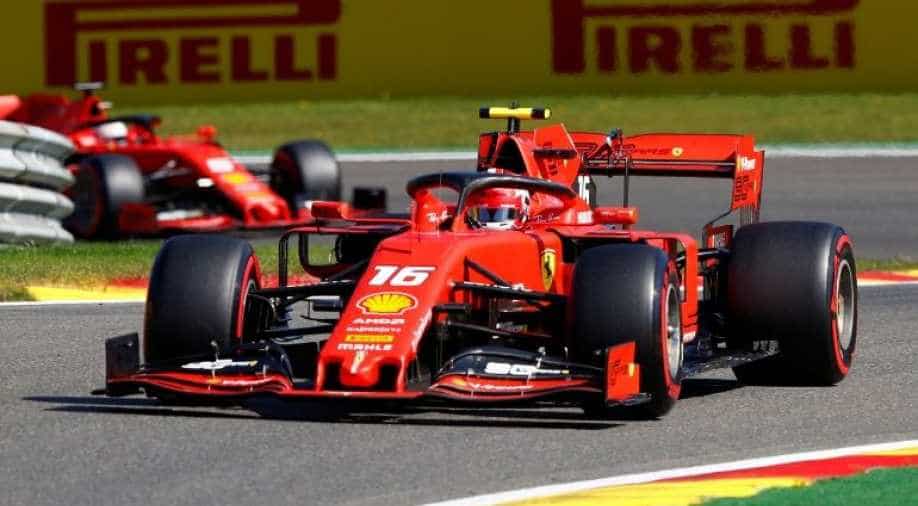 Hamilton, who leads Mercedes teammate Valtteri Bottas by 62 points in the overall standings, ended his session in the barriers

Charles Leclerc set the pace ahead of teammate Sebastian Vettel to complete a practice clean sweep for Ferrari on Saturday even as championship leader Lewis Hamilton crashed.

The Monegasque, who was also fastest on the opening day of practice on Friday, lapped the 7-km long Spa-Francorchamps track in one minute, 44.206 seconds.

Vettel, hoping to end his victory drought that goes back to last year’s Belgian race, was 0.451 seconds off the pace.

Hamilton, who leads Mercedes teammate Valtteri Bottas by 62 points in the overall standings, ended his session in the barriers.

The 34-year-old’s car snapped out of control under braking for turn 12 and ploughed into the tyre wall.

But a Mercedes spokesman said the team should be able to get the car repaired in time for qualifying.

With Hamilton out, it was left to Bottas to lead the Mercedes charge.

The Finn, confirmed alongside Lewis Hamilton at the world champion team for another year on Thursday, was third but nearly half a second off the pace.

Daniel Ricciardo was an impressive fourth for Renault ahead of Red Bull’s Max Verstappen.

Sergio Perez, fresh from signing a new three year deal with Racing Point, was sixth ahead of Hamilton, whose time before he crashed was good enough for seventh.

Ferrari, still hunting for their first win of the year, have struggled around twisty tracks this season.

But their car has been better suited to high-speed layouts like Spa, which will host Sunday’s race.

That track and Monza, where Ferrari’s home Italian Grand Prix will be held the week after, have been singled out as the two best opportunities for the team to shine.