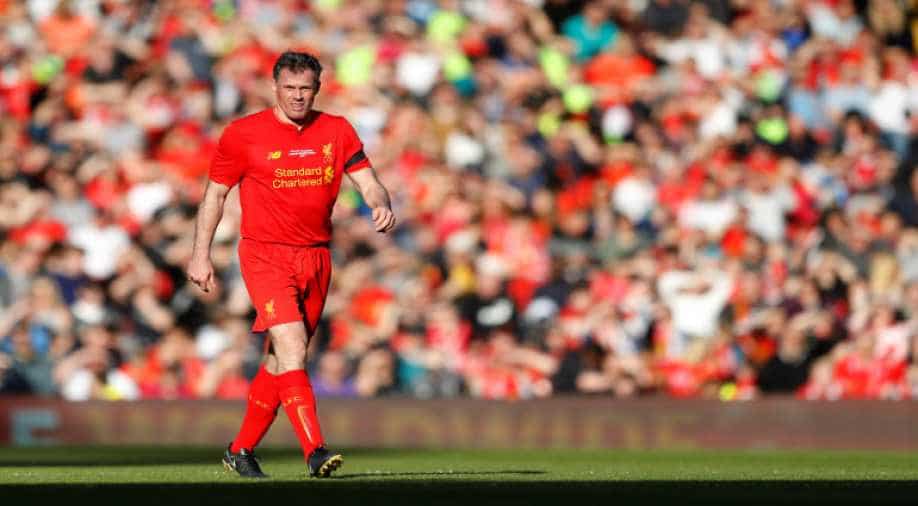 Carragher has been a regular and popular part of Sky's Premier League coverage since retiring as a player from Liverpool in 2013 Photograph:( Reuters )

British police said Wednesday they were probing a spitting incident involving TV football pundit Jamie Carragher as broadcaster Sky Sports suspended the former Liverpool and England defender for the rest of the season.

Carragher was filmed leaning out of the driver's window of his Range Rover before spitting at a car containing a Manchester United fan, hitting the driver's 14-year-old daughter in the face after some goading following Liverpool's 2-1 defeat at Old Trafford on Saturday.

Sky Sports on Wednesday suspended Carragher from his job as TV pundit until the end of the season, a role reportedly worth £1 million ($1.4 million) a year.

"Jamie has taken full responsibility for what has happened and we will ensure he gets the help he needs to guarantee something like this never happens again," said a Sky Sports statement.

A spokeswoman for Greater Manchester Police said: "A police investigation has been launched and the owner of the footage has been spoken to. Attempts are being made to speak to all parties involved."

Sky, which holds the bulk of British television rights to Premier League matches, hinted that Carragher could return to TV screens next season.

"Before the start of the next season we will sit down with Jamie to discuss whether he is ready to return to his role," the statement said.

Carragher, 40, apologised to the family and described his behaviour as a "moment of madness", although he said he had not seen the girl in the front of the car.

"I have already said I take responsibility for what happened. It was a moment of madness and I'm going to speak to the relevant people to ensure something like this never happens again. Again apologies all round," Carragher posted on Twitter on Wednesday.

Carragher has also been backed by high-profile colleagues, including former Manchester United captain Gary Neville, who has formed a highly regarded punditry team with Carragher at Sky.

"He's massively passionate about football and he's overstepped the mark and shouldn't have reacted," Neville tweeted.

"I've been on TV for 3 years with him and this isolated incident shouldn't stop us working together."