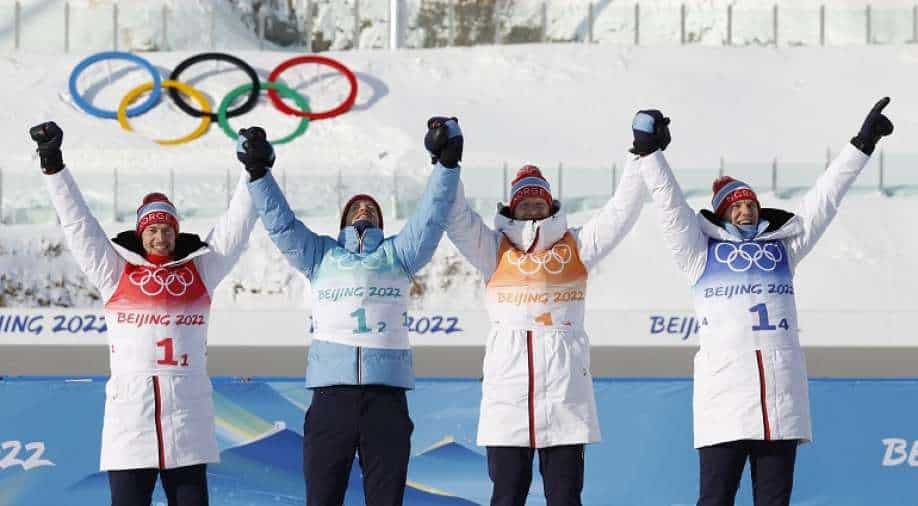 Norway roared back to pull off a stunning win in the men's biathlon relay at the Beijing Olympics on Tuesday following a sensational collapse on the final shoot by Eduard Latypov of the Russian Olympic Committee (ROC).

When Sturla Holm Lagreid handed over to Tarjei Boe in Tuesday's Olympic biathlon relay he was sure Norway's hopes of gold were gone, but a collapse by Eduard Latypov and a stunning final leg by Vetle Sjaastad Christiansen delivered a stunning victory.

While Latypov, representing the Russian Olympic Committee, missed four of his five shots on his final visit to the range, Christiansen's five-shot salvo was perfect and he powered home to take the gold medal before being mobbed by his teammates.

"I was so pumped up when he left the shooting, I was screaming with all I had because it was such an incredible moment for me, to watch him go out there in the lead and secure the gold," an elated Lagreid told Reuters.

There was little to suggest a Norwegian win when Lagreid handed over to the elder Boe brother in seventh place, more than 40 seconds behind the ROC team, but Tarjei and his brother Johannes battled back to get close enough for Christiansen to exploit Latypov's wayward shooting.

"We weren't really in the gold fight in the beginning, but when the Russian started with these mistakes, there was a chance for the gold," Lagreid said.

"It was still unbelievable to watch Vetle hit every target in the last standing shoot and just go for it."

The Norwegians are enjoying a stellar Games at the National Biathlon Centre, picking up five gold, one silver and four bronze medals, and Lagreid said the team would be celebrating.

"We have to suit up tonight and maybe we will have something else for dinner, other than pasta and water," he said, his face lit up by a golden grin.