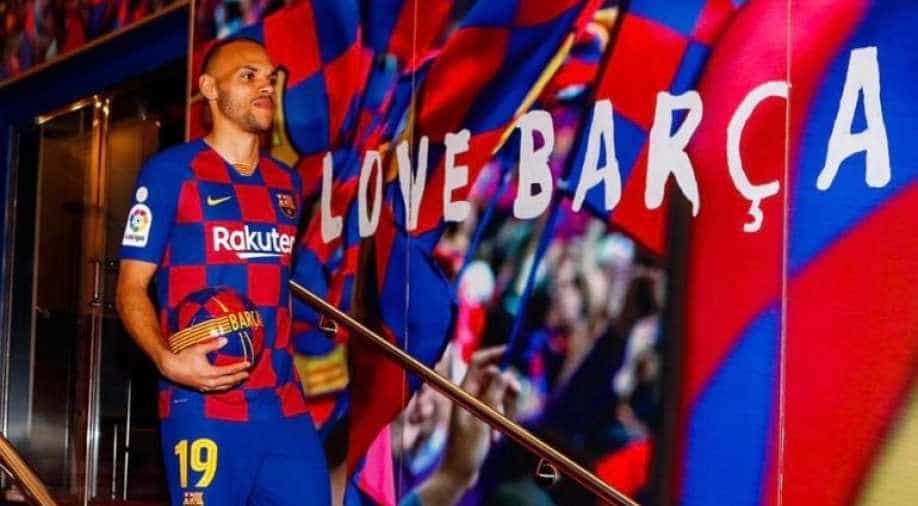 Barca has taken advantage of the regulation that enables Spanish clubs in the top two divisions to buy from another La Liga club outside the transfer window if they lose a player to injury for more than five months.

Barcelona on Thursday confirmed the signing of Danish forward Martin Braithwaite from Leganes after capitalising on a curious La Liga rule to ease their shortage of options upfront.

Barca has taken advantage of the regulation that enables Spanish clubs in the top two divisions to buy from another La Liga club outside the transfer window if they lose a player to injury for more than five months.

"My ambition has always been to play at this level and when you persevere and you are positive, things end up happening," said Braithwaite after signing his contract.

Welcome to the Club and the city @MartinBraith. We wish all the best and great success in this new challenge you start today with Barça pic.twitter.com/fKZuFVpOeh

"I am very happy to be here because, as a footballer, it is one of the greatest things that can happen to you to play for the best club in the world."

With Ousmane Dembele expected to be out for the rest of the season with a hamstring tear, the Catalans signed Braithwaite after paying the Dane's 18 million euro buy-out clause.

"The player will sign a contract with the Club for the rest of the season and four more until 30 June 2024 with the buy-out clause set at 300 million euros," Barcelona announced on their website earlier in the day.

After also selling Youssef En-Nesyri to Sevilla last month, Braithwaite's exit is a cruel blow for struggling Leganes, who will not be able to bring in a replacement unless an exception is made by La Liga.

"We paid the clause in accordance with the regulations, but we think it should be revised because it is not fair that Leganes cannot therefore recruit."

Leganes sit 19th in the table and play 17th-placed Celta Vigo on Saturday. Braithwaite was their top scorer this season with six goals.

But the 28-year-old's addition will give cover for Barcelona, who were already without Luis Suarez to a knee injury before Dembele's extended absence was confirmed.

The club applied for permission last week to make an emergency signing and were given the green light by La Liga on Monday.

Braithwaite could make his debut when Barca play Eibar at Camp Nou in the league on Saturday but the rule states he will not be allowed to play in the Champions League.

His arrival comes after the club allowed two forwards to leave last month: Carles Perez to  Roma and Abel Ruiz to Braga.