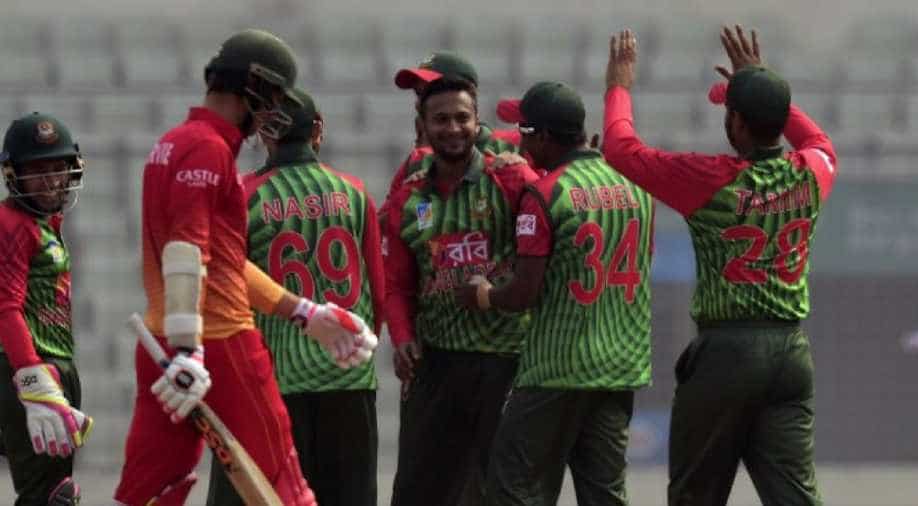 The first match of tri-nation ODI Series between Zimbabwe and Bangladesh is underway.

Bangladesh won the toss and opted to bowl.

Batting first, Zimbabwe couldn't score much and had to settle for 170 runs after being destroyed by the stunning spell of Bangladeshi bowlers.

Bangladesh created pressure by taking wickets at regular intervals and restricted the Zimbabwe team at a lower total.

Zimbabwe had a crashing start as they lost 2 wickets in the first over.

Shakib-al-Hasan was magnificent in his spell and took two early wickets of Solomon Mire and Craig Ervine.

Brendan Taylor and Sikandar Raza tried scoring and created a partnership of 21 runs before Taylor lost his wicket to Mustafizur at 24.

Later, Raza defended his wicket and tried to push the run rate. He found a determined ally in Peter Moor and they both had put up a 50-run partnership.

Sikandar Raza was playing defensive but was run out by Shakib and Rahim. The rest of the team wrapped up quickly.

Sunzamul Islam got one wicket, Mustafizur Rahman got two wickets and Rubel Hossain marked a milestone of taking 100 wickets after blowing off the stumps of Tendai Chatara.

WICKET! Rubel on a hat-trick! Zimbabwe are 167/9.#BANvZIM

To Watch Tri-Nation ODI Series LIVE, Download the app from the links below and hit the LIVE Button.