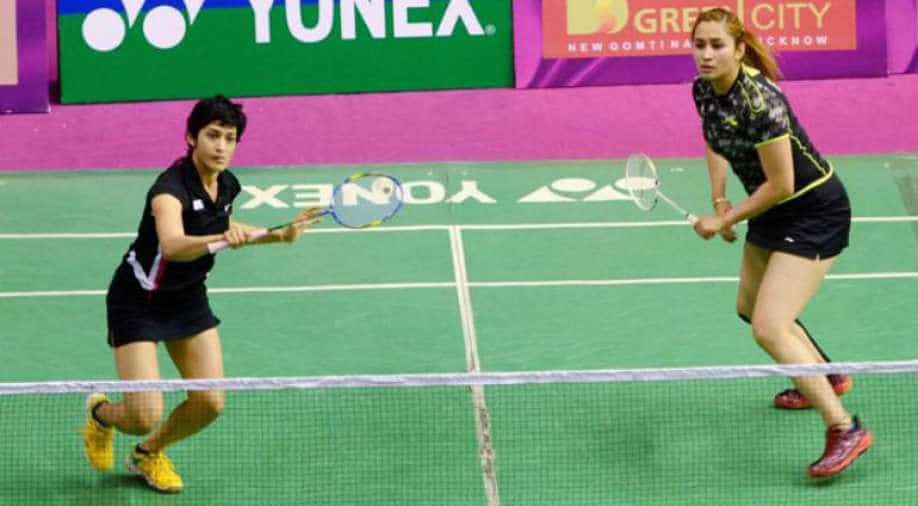 Seasoned shuttler Ashwini Ponnappa is impressed with the progress made by India's doubles players on the Pro circuit but says they will take some time to develop into world beaters.

Of late, doubles players have produced some good results with new pair of Satwiksairaj Rankireddy and Chirag Sen entering the quarterfinals in Super Series tournaments in Korea and France and mixed combo of Pranaav Chopra and N Sikki Reddy reaching the semifinals at Japan Open.

"I think doubles is on the right track. But it will take time. Doubles takes time," said Ashwini, who won two titles at the just-concluded Senior National Championship.

"Doubles have to train together, have to see how two players combine, while as a single player doesn't have to go through so much change. But doubles are on right track, Chirag and Satwik are doing well, Pranaav and Sikki doing well. It gives confidence and motivates all the players," she added.

It was double delight for Ashwini yesterday as she won the mixed doubles title with Satwiksairaj Rankireddy and women's doubles trophy with N Sikki Reddy.

"It feels good (to win). For a long time not all the top players were playing. This time we had all playing, so it was one of a kind Nationals. For me, it was special because I had never won a mixed doubles title before," Ashwini said.

"I won women's doubles with Jwala (Gutta) in the past but I never had a mixed doubles partner, so it was a first for me and it really felt good especially because Sikki and Pranaav are more experienced than we are right now.

"They are in good shape, they had some good results in last one year, so it was a confidence booster. It was a National which everyone wanted to win since all top players were there and it was nicely hosted," added Ashwini, who had bagged the women's title twice with Jwala in 2009 and 2013.

The 28-year-old from Bangalore is one of the most experienced doubles players in the country. She had won the 2011 World Championship bronze with Jwala and also bagged the Commonwealth Games gold and silver in the last two editions at New Delhi and Glasgow.

Ashwini is hoping to be third time lucky but reckoned it will be a challenge.

"I definitely want to go and win a medal again next year at the Commonwealth Games. I think it will be a big challenge for everyone because all will be coming to win," she said.

"Every tournament we play from now will be a practice to work on our game and get some good results before the Commonwealth Games. I hope our performance will be better than the past," Ashwini, who had earlier paired up with B Sumeeth Reddy and reached the finals at Syed Modi Grand Prix Gold in January, said.

Commonwealth Games will be held in Gold Coast, Australia from April 4 to 15 next year.