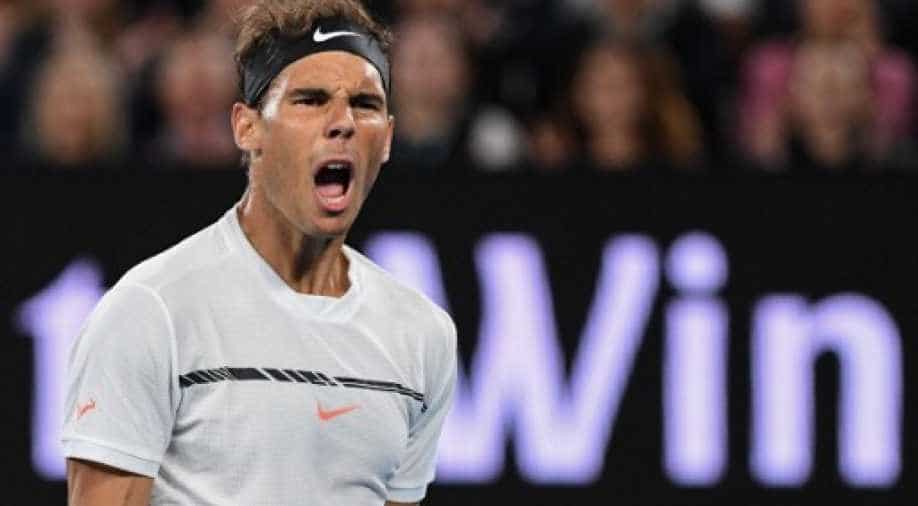 Rafael Nadal reacts after winning a point during his quarter-final match against Milos Raonic. Photograph:( AFP )

The 14-time grand slam champion beat the injury-hit world number three Raonic 6-4, 7-6 (9/7), 6-4 in two hours 44 minutes, to move just a step away from setting up another eagerly-awaited summit match with his old rival Roger Federer.

Dimitrov beat David Goffin in straight sets to advance to the semi-finals, continuing with his fine start to the season.

But Nadal, who enjoys a 7-1 head-to-head with Dimitrov, preferred to focus on his next match than think of playing Federer in the final.

"Let me enjoy today, the victory, being in semi-final. For me is great news again. It's a good start of the season," he told reporters.

"Now I have a very tough match against Dimitrov.

"Whatever happens on the other side of the draw, I think it is great for tennis that Roger is there again after an injury, after a lot of people talked that probably he would never be back.

"The real thing is that he's back and he's probably ready to win again, fighting again to win a major.

"That's good for the fans because Roger is a legend of our sport. I am happy to be there, too. I am focused on my semi-final."

It was another accomplished performance from the 30-year-old Spaniard who reached his first Grand Slam semi-final since he won the 2014 French Open, and struggled with injury last year.

"All of them are top players. So that's very important for me because that means that I am competitive and playing well.

"I'm so just excited about being back in final rounds of the most important events."