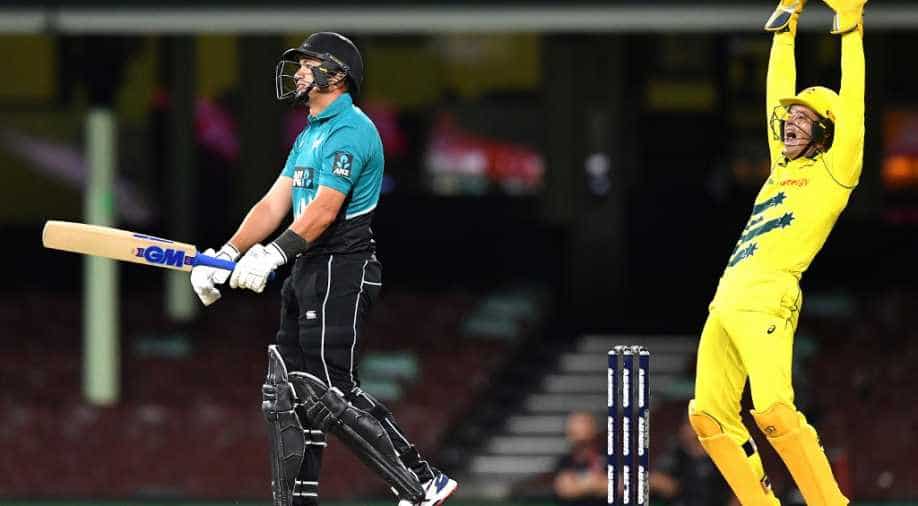 Australia crushed New Zealand by 71 runs in the first one day international at an empty Sydney Cricket Ground on Friday. After New Zealand earlier kept the home side to 258 for seven, the Australian bowling attack dominated the Kiwi batsmen to dismiss the visitors for 187 in the 41st over.

Australia crushed New Zealand by 71 runs in the first one day international at an empty Sydney Cricket Ground on Friday.

After New Zealand earlier kept the home side to 258 for seven, the Australian bowling attack dominated the Kiwi batsmen to dismiss the visitors for 187 in the 41st over.

Cricket Australia barred spectators from the match in response to the coronavirus pandemic, leading to the strange sight of players acknowledging milestones to empty grandstands.

It was also revealed that Australian fast bowler Kane Richardson was in quarantine early in the day and had been tested for the virus after feeling unwell.

However, he was subsequently cleared of the virus and returned to the ground to rejoin his teammates.

Australian skipper Aaron Finch won the toss and chose to bat, with the home side at one stage looking at a score in excess of 300 following a superb opening partnership from Finch and David Warner.

But once Warner (67) and Finch (60) were dismissed, the Australian innings lost momentum and New Zealand clawed their way back into the game, despite a late flourish from Marnus Labuschagne, who made 56 from just 52 deliveries.

New Zealand must have given themselves a good chance of taking a 1-0 lead in the three-match series, but some superb Australian bowling in the first 10 overs meant the visitors were always behind in the run chase.

None of the New Zealand batsmen was able to dominate -- Martin Guptill top scored with 40 -- and wickets fell at regular intervals as Australia took control.

The victory will come as a welcome boost to the Australians, who had lost their last five ODIs in series losses to South Africa and India.

Test spearhead Pat Cummins was the pick of the bowlers with 3-25, while allrounder Mitchell Marsh claimed 3-29.

Adam Zampa and Josh Hazlewood both picked up two wickets in an impressive team display.

Warner brought up a chanceless half-century but soon began to struggle when New Zealand's fastest bowler, Lockie Ferguson, came round the wicket and he eventually fell when he was beaten by pace and sliced a Ferguson thunderbolt to mid-on.

Santner struck next when Finch got a faint edge to keeper Tom Latham to leave Australia 145 for two.

He then rocked the home side when he bowled Steve Smith (14) with the addition of only one run.

Leg-spinner Sodhi was expensive early but he adjusted his length and claimed the next three wickets to give New Zealand hope of chasing down the Australian total under the SCG lights.

The second match will take place on Sunday, also at the SCG.