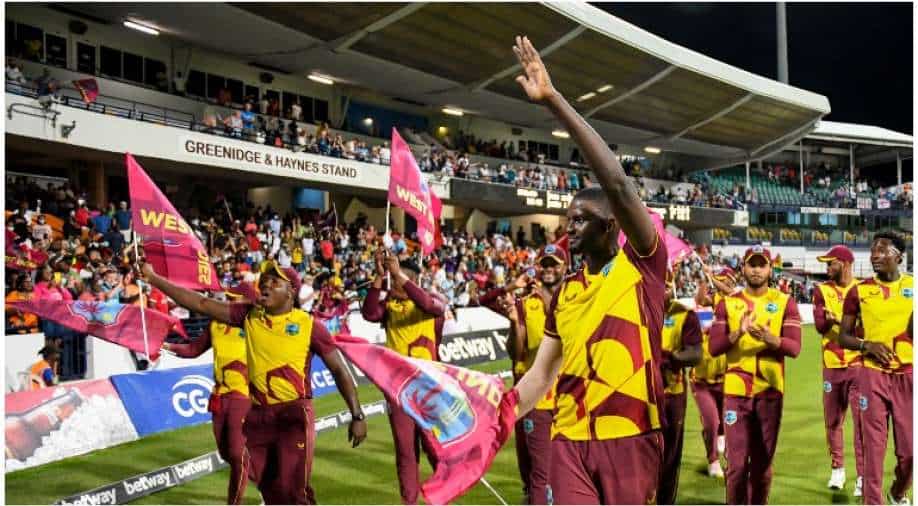 Kieron Pollard-led West Indies defeated England by 17 runs in the five-match T20I series decider at the Kensington Oval in Barbados on January 30 (Sunday). After the series was tantalisingly poised at 2-2, Pollard & Co. produced an all-round performance to win 3-2.

When Pollard and Co. opted to bat first, they rode on Kyle Mayers, Brandon Kings, Nicholas Pooran, Rovman Powell and the skipper's vital knocks to post 179-4 in 20 overs. With 20 needed for Eoin Morgan-led England in the final over, Pollard gave the ball to former captain Jason Holder. Holder didn't disappoint as he became the first West Indies bowler to claim a hat-trick in the shortest format of the game.

While Holder started off with a no-ball, he dominated the remainder of the balls in the contest by not only picking a hat-trick, he ended with four wickets on successive deliveries. The lanky pacer first removed Chris Jordan, on a slower full toss, and then also dismissed pure batter Sam Billings -- both caught by Hayden Walsh.

Holder wasn't done yet as he removed Adil Rashid, bowling a cross-seam delivery outside off-stump, before getting the better of Saqib Mahmood on the penultimate delivery to also complete a five-fer. Thus, Holder returned with the Player-of-the-Match as well as the Player-of-the-Series award, accounting for 15 scalps in five games. Here's the video of Holder's heroics in the series finale:

At the post-match presentation, Holder reflected on his match-winning and record spell. "A lot of hard work, can improve on my death bowling, add some variations. But I'm gaining confidence and so is the captain in me. Bowling the last over tonight just added to it, I'm happy that I was given the responsibility. I am feeling good about my role in the team, I pass on my experience, pride myself as a complete team player, just want to put my hand up, even when I'm not bowling, I can share a few things with the younger lot. A lot of thanks to the management and the staff," said Holder.