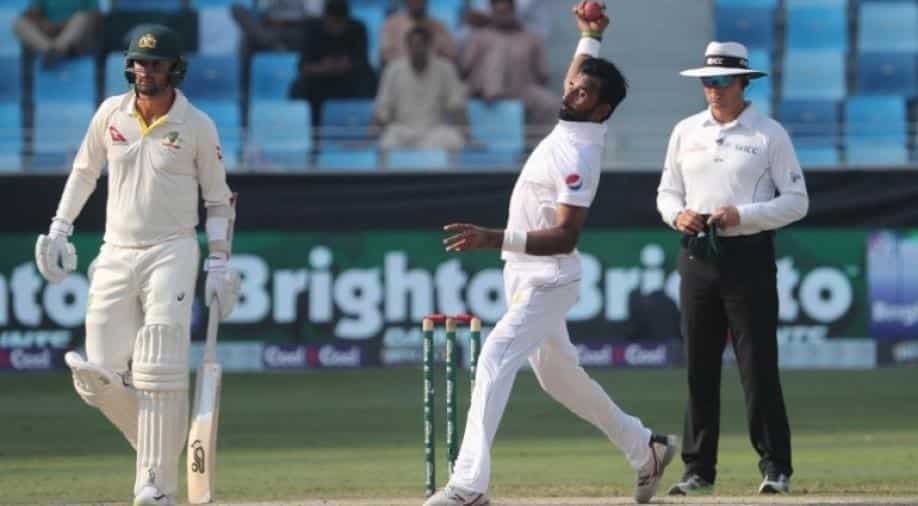 Bilal Asif (C) bowls during the third day of play of the first Test cricket match in the series between Australia and Pakistan. Photograph:( AFP )

In a dramatic collapse, Australia lost 10 wickets for just 60 runs.

Pakistan debutant offspinner Bilal Asif grabbed six wickets for just 36 runs as Australia were bowled out for 202 after tea on the third day of the first test on Tuesday.

Pakistan earned a huge lead of 280 runs but didn’t enforce the follow-on.

The newcomer dismissed the Australian top order, and fast bowler Mohammad Abbas chipped in with 4-29 as the batsmen failed to understand the seam and spin on a pitch where Pakistan compiled 482 in its first innings.

Khawaja and Finch defied Pakistan in the first session and carried their team from 30 without loss overnight to 137 without loss by lunch.

But once Finch drove casually and was caught at short mid-on after lunch, the top order crumbled against Asif’s spin.

Finch, who played 93 one-day internationals before earning his first test cap, accumulated 62 from 161 balls, including five boundaries and a six.

Shaun Marsh was next when he drove at Asif and was caught in the slips.

Leg-spinner Yasir Shah was unlucky not to be amongst wickets, having dropped Mitchell Marsh off his own bowling for two and wicketkeeper Sarfraz Ahmed missing a stump in the first session with Khawaja on 17.

RR vs CSK, IPL 2020 Live Streaming: When and where to watch Rajasthan Royals (RR) vs Chennai Super Kings (CSK)?