'Will find solution to Kashmir' is pet BJP dialogue: Cong 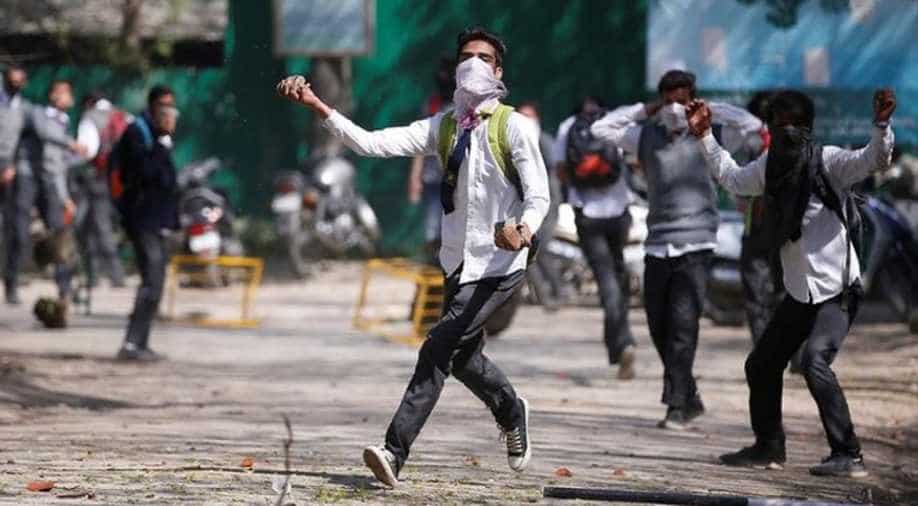 Uttar Pradesh Congress chief Raj Babbar spoke on the same lines as Aiyar. He said the BJP has not followed up its words with action. Photograph:( Reuters )

While taking a dig at Union Home Minister Rajnath Singh's remark on Kashmir, the Congress Party on Monday said that it is the pet dialogue of the ruling dispensation, adding that until it changes its 'Hindu rashtra' mindset, the incumbent government would not be able to succeed at finding a solution to Kashmir.

Congress leader Mani Shankar Aiyar slammed the Centre for being unable to do anything for solving the 'Kashmir' problem in the past three years.

"I hope they do but I just cannot believe that they will be able to succeed because until fundamentally they change their mindset and not attempt to establish a ' Hindu rashtra' by fair means or fowl, they cannot find a solution to Kashmir," Aiyar told ANI.

"Certainly, nothing that they have done in the last three years gives any indication that they have any idea at all as to how to solve the problem. They certainly know how to aggravate it," he added.

Uttar Pradesh Congress chief Raj Babbar also spoke on the same lines, mocking the government for only speaking but being unable to show the same in their actions.

"They have two pet dialogues. One, this is age-old problem. They say this regarding everything, be it law and order, border policy, foreign policy etc. Second, this is condemnable and a befitting reply will be given soon. But, they have been unable to do anything in the past three years. At the time of demonetisation also, they said terrorism will end now. But gradually, terror activities started again," Babbar told ANI.

Assuring complete closure of the Kashmir issue on behalf of the government, Rajnath Singh yesterday made a strong statement that Kashmir, Kashmiris and Kashmiriyat belong to India.

"We understand that Kashmir, Kashmiris and Kashmiriyat are ours. I assure you that we will come up with a permanent solution to end the issue," he said while addressing a gathering in Pelling, Sikkim.

In the hope of resolving the ongoing friction between India and Pakistan regarding territorial disputes in Kashmir, the Union Home Minister said it is time for Islamabad to mend its ways and come to a consensus on the issue, rather than prolonging the same.

"Pakistan continues to carry out acts of violence in the name of Kashmir, just to destabilise us. It is time for Pakistan to end these and look into resolving the matter and extending cooperation," said Rajnath.

Developing on the importance of easing tensions along the border, Rajnath while drawing upon the reduction of border transgression with China, said Pakistan was invited to maintain friendly relations and not just bilateral ties.

"There might be perceptional differences, but the border friction with China has declined now. Pakistan Prime Minister was invited to the oath-taking ceremony not just to join hands, but to be cordial hereafter," he said.