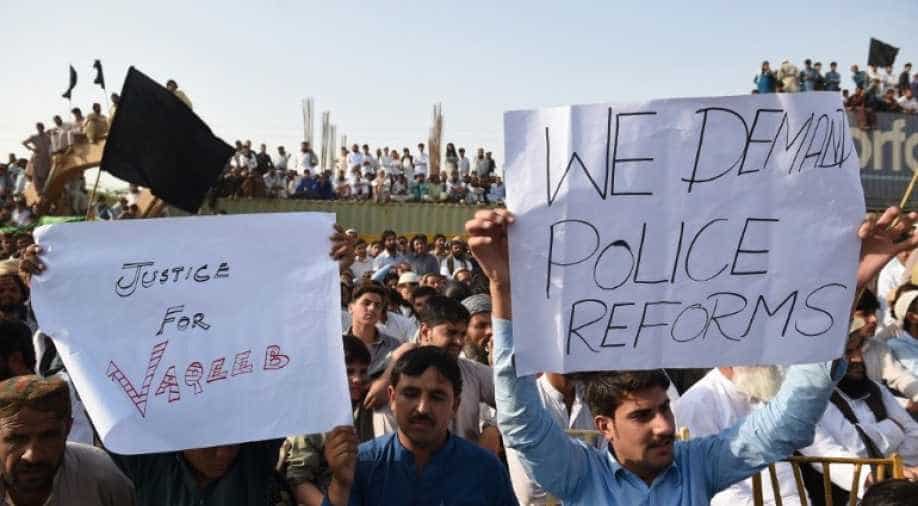 File photo: Pakistani demonstrators shout slogans during a protest against the killing of 27-year-old man Naqeebullah in an alleged police encounter, in Karachi on January 22, 2018 Photograph:( AFP )

Anwar was accused of staging scores of fake police encounters in which a number of individuals were killed in Karachi.

Former SSP Malir Anwar, known as an encounter specialist, is among 18 individuals from six countries that the US Department of the Treasury`s Office of Foreign Assets Control (OFAC) imposed economic sanctions on for their alleged engagement in human rights violationsTuesday`s announcement was made in connection with International Human Rights Day.

Anwar was accused of staging scores of fake police encounters in which a number of individuals were killed in Karachi.

"During his tenure as the Senior Superintendent of Police in District Malir, Pakistan, Rao Anwar Khan (Anwar) was reportedly responsible for staging numerous fake police encounters in which individuals were killed by police, and was involved in over 190 police encounters that resulted in the deaths of over 400 people, including the murder of Naqeebullah Mehsood," the US Treasury said in a statement.

Mehsood, a young man from Waziristan region, was killed on January 13, 2018, in Karachi during a fake encounter allegedly staged by Rao.

A police inquiry later established the encounter was staged. The extrajudicial killing sparked nationwide outraged with a Pashtoon rights group later using it as a rallying call.

The Department further added that Anwar had "helped to lead a network of police and criminal thugs that were allegedly responsible for extortion, land grabbing, narcotics, and murder".He has been designated "for being responsible for or complicit in, or having directly or indirectly engaged in, serious human rights abuse," the Department said.

'Bajwa's legs were shaking': Who is PML(N) leader Ayaz Sadiq?