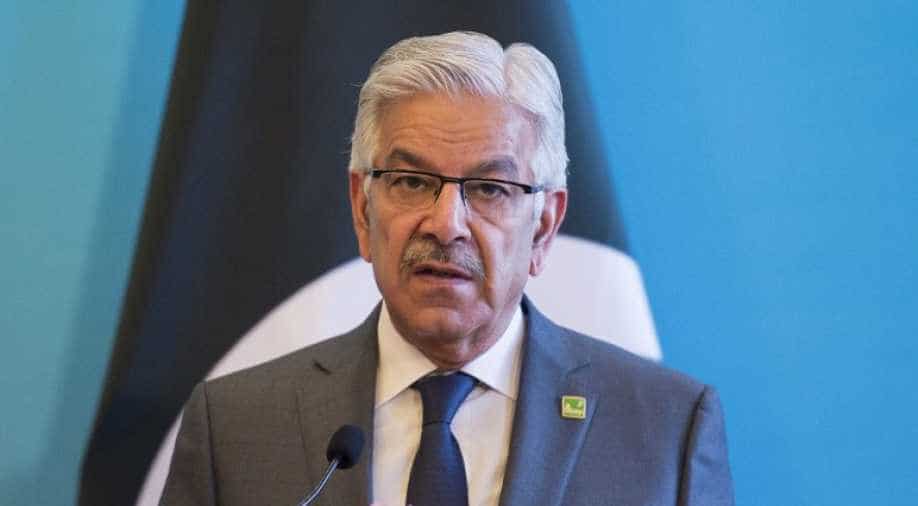 Asif had said earlier that he would respond to President Trump's tweet to "let the world know the truth..difference between facts & fiction." Photograph:( AFP )

Responding to President Trump's tweet on Pakistan "deceiving" the US on its war on terror, foreign minister Khawaja Asif challenged the US declaring that it can hire an audit firm to find out whether $33 billion was spent on fighting terror.

In his tweet, Khawaja said: "President Trump quoted figure of $33billion given to Pakistan over last 15 years, he can hire a US-based audit firm on our expense to verify this figure and let the world know who is lying & deceiving."

Pres Trump quoted figure of $33billion given to PAK over last 15yrs,he can hire a US based Audit firm on our expense to verify this figure & let the world know who is lying & deceiving..

Asif had said earlier that he would respond to President Trump's tweet to "let the world know the truth..difference between facts & fiction."

President Trump in a New Year tweet had said that the US has "foolishly given Pakistan more than 33 billion dollars" in aid over the last 15 years, and Pakistan had given the US "nothing but lies & deceit."

Trump's tweet created a firestorm in Pakistan with Pak authorities determined to fire back at Trump's latest lash out against its allay on the war on terror.

After the meeting the NSC expressed "deep disappointment" at the allegations levelled against Pakistan by US President Donald Trump, Pakistan's Dawn newspaper reported.

Asif's attack on the US comes just hours after the Trump administration suspended $255 million military aid to Pakistan saying the fate of such assistance will depend on Islamabad's response to terrorism on its soil.

US relations with Pakistan hit a new low in August last year after President Trump unveiled his new Afghanistan strategy blaming the Pakistan government for creating "safe haven" for terrorists.