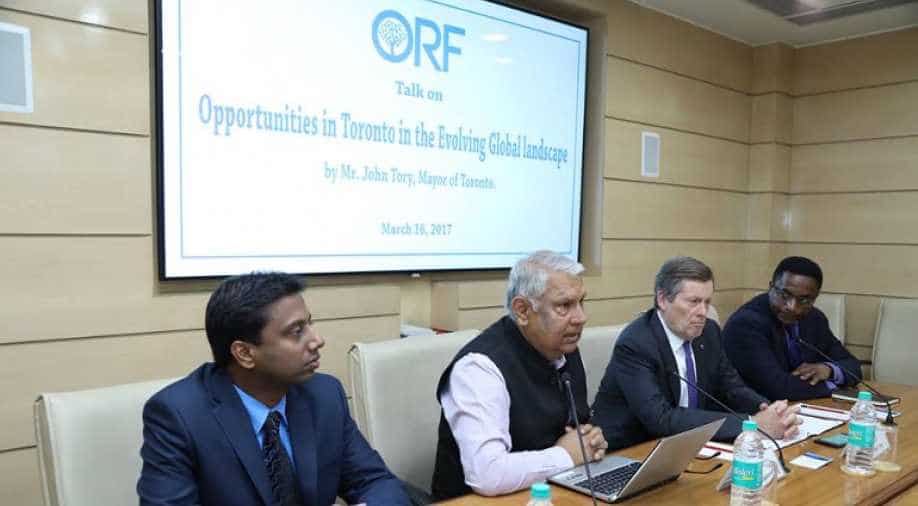 Canada’s second-most internationally beloved politician with the initials JT was in New Delhi Wednesday to speak to business leaders and politicians “to let the world know Toronto is open for business”.

The twenty-odd minute speech was dubbed, “Opportunities in Toronto in the evolving global landscape”.

Tory insisted he was here as a salesman for Toronto, the first mayor from the city to visit India in 20 years. Premier Kathleen Wynne visited in February 2016, and the chatter before Tory began speaking anticipated a visit to India from Prime Minister Justin Trudeau (the other "JT") later this year or in early 2018.

Mayor Tory’s sell should be easy. Whenever I tell Indians here I myself come from Toronto, they instantly become visibly excited and tell me of their four thousand relatives who live there.

Tory began with facts: Canada is a safe and stable parliamentary democracy with 1.2 million people of Indian-origin living there, good for three per cent of the country's overall population. One out of every two people in Toronto was born outside Canada.

Tory emphasised that Toronto wants Indian students to enroll in its high-quality schools, and was glad to say that some graduates would head back to India while some would remain in Canada, to both country's benefit.

The Toronto film industry got special mention, as cinema could be the heart of the cultural link between the two countries. For decades, many American movies were actually filmed in Toronto (it can easily be dressed up to look like American cities, and Canadian taxes greatly lower production costs). It's easy to see why Toronto wants to capture the growth potential of linking up with Bollywood.

Toronto has historically been pitched as a centre of commerce and a haven for multiculturalism, but the cliche for the latter has received an update. Even conservatives like Tory pitching Toronto-multiculturalism are too sophisticated now to say racism there does not exist, so they add a caveat: We’ve made progress, but we must do more. This was a major theme. While this contains some of the passive smugness the world may not know to detest Canadians for, the cliches Tory invoked is too true to dismiss, especially at a time when the United States and many European countries are closing their borders.

Trump loomed large, but Tory artistically avoiding saying his name aloud. He repeatedly said he was unwilling to comment on the situation elsewhere, including in Europe, and said that Toronto is simply sharing its positive story that has led to its success.

Tory claimed he is “furiously resisting polarisation”, and that he has categorically denounced racist incidents when they do indeed come up in Toronto, for which he said he is roundly commended by citizens people.

With him was the newly-elected Toronto city councillor Neethan Shan, the city’s first Tamil councillor. Tory referred to Shan as “a breakthrough”, and said it was important for visible minorities to see themselves in the institutions that impact their lives, in order to instil trust.

Tory spoke about bus shelter ads featuring a white and black person with a caption prompting the viewer-- who would you hire? He cited this as evidence that the government is deliberately trying to provoke people into thinking about barriers different people face.

While this comes from a man who during the 2014 mayoral race claimed white privilege does not exist, whether the mayor himself has genuinely evolved on this file or whether he’s speaking for the city broadly, the thrust of his point about the city holds. He was selling Toronto, not him.

He pointed to a Toronto-based piracy-detection company that chose to locate there because, surely among other reasons, it was the easiest place to find people who speak so many languages from around the world.

Anecdotally, so many Indians have told me they would love to visit if not move to Canada that Tory’s speech to win them over seems hardly necessary, until you remember he was talking less to individual Indians than to Indian business.

Tory started his trade mission to India at the Delhi-based headquarters for the digital payment company Paytm, and will meet officials from Tata, India's largest conglomerate, about "expansion plans".

Tory closed by issuing a personal guarantee that he would “bend over backwards” for “entrepreneurs and risk takers” in order to welcome them and give them access to “smart people there”.

Indians seem to have always had a soft spot for Canada, and maybe particularly Toronto, but in an era of post-demonetisation and President Trump, it's nice to see Toronto make an extra effort to welcome them, and their money, to the city.