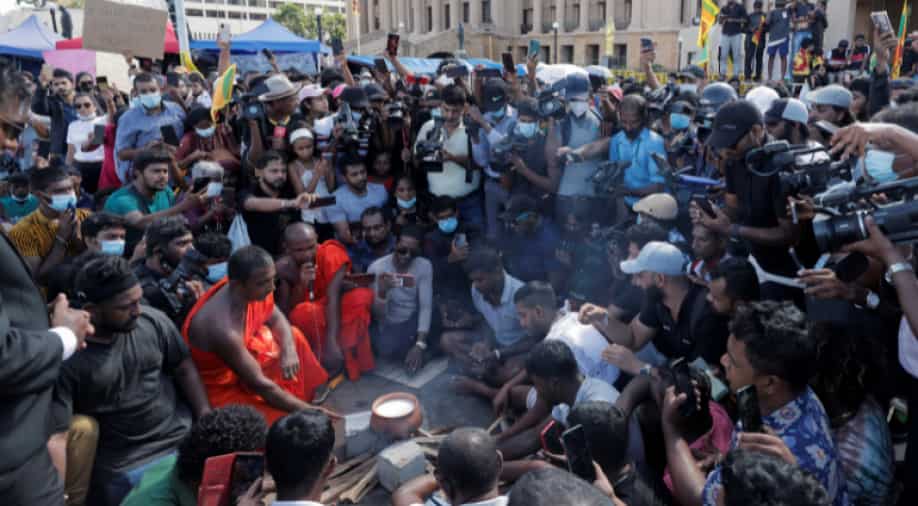 Demonstrators take part in a ritual of boiling milk to mark the Shinala and Tamil new year during their protest against Sri Lankan President Gotabaya Rajapaksa in front of the Presidential secretariat, amid the country's economic crisis in Colombo, Sri Lanka Photograph:( Reuters )

Sri Lanka on Saturday (April 16) halted share trading for five days after a hike in interest rates by its central bank.

The island nation, which has a population of 22 million, has been rocked by its economic crisis since independence.

Demonstrators are protesting all across Sri Lanka against the rise in fuel and food prices along with power cuts that are lasting for up to 13 hours a day.

They are demanding the “tyrant and nepotist government” of President Gotabaya Rajapaksa to step down.

A protester Dani Karunanathan told news agency Reuters, "We are sick and tired of this tyranny because there is so much of nepotism here. The prime minister and president are brothers and we really want them to go away from here."

Officials of the Colombo Stock Exchange have expressed concern over the "ability to conduct an orderly and fair market."

It has doubled its benchmark interest rate to 14.5 per cent owing to the "present situation in the country".

According to governor P. Nandalal Weerasinghe, "The rate hike will give a strong signal to investors and markets that we are coming out of this as soon as possible."

"I want to be very clear that my message is not one of blind positivity. Things are challenging and we need to take decisive action. Things will get worse before they get better, but we need to apply the breaks to this vehicle before it crashes," he added.

"The President and I are spending every moment to formulate solutions on how to get Sri Lanka out of this current crisis," said Sri Lanka's Prime Minister Mahinda Rajapaksa.

The country's newly appointed finance minister, Ali Sabry is coordinating with the International Monetary Fund and World Bank to negotiate a financial package.

Former justice minister Sabry said, "I'm willing to do this as long as it takes."

Sri Lanka has declared a default on its external debt worth $51 billion during the traditional New Year holiday.

"We cannot step away from repaying debt because the consequences are terrifying. There is no alternative, we must restructure our debt," Sabry said.