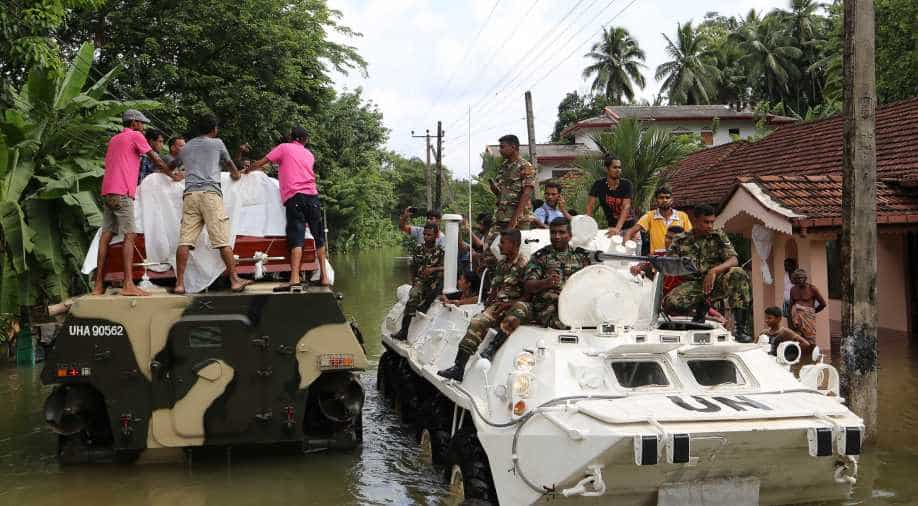 This handout photograph released by the Sri Lankan Army shows an army armoured personnel transporting a coffin (L) containing a landslide victim, as evacuees are transported away from the most flooded areas in Bulathsinhala in Kalutara district. Photograph:( AFP )

Sri Lanka stepped up its military-led relief operations Saturday as nearly half a million people were displaced after a monsoon deluge killed at least 122 people and threatened more flooding.

Rainfall on Friday triggered the worst flooding and landslides in 14 years in the southern and western parts of the island and although the rain eased on Saturday, low-lying areas remained under water, the authorities said.

The official Disaster Management Centre (DMC) said a total of 122 people were confirmed dead while 97 remained missing. Another 49 injured in landslides were hospitalised.

"Most of the fatalities were due to landslides and only a very few drowned," said government spokesman Rajitha Senaratne who is also the health minister.

He said nearly 500,000 people were forced from their homes and most of them had moved into temporary shelters.

The military led search operations in landslide-hit areas and the airforce deployed five aircraft for rescue operations and another five to transport emergency supplies to villagers who could not be reached by road.

At the village of Bulathsinhala, relatives were seen loading coffins of 10 victims onto armoured personnel carriers to transport them across flooded streets to higher ground for burial.

There were similar scenes in the adjoining Ratnapura district, the island's gem capital, which was also flooded. The authorities arranged funerals for dozens of victims.

The deluge caused the Nilwala river to burst its banks, threatening to submerge a large number of villages, the DMC said.

It warned thousands of villagers living near the Nilwala to evacuate to higher ground.

President Maithripala Sirisena, who returned from a state visit to Australia, travelled to Kalutara, one of the worst affected districts south of Colombo, to supervise relief operations.

"The government will give new houses to those who lost their houses," he tweeted.

The authorities dropped thousands of life jackets for marooned people in a bid to protect them until they could be moved to safer ground.

The United Nations said it will give water containers, water purification tablets and tarpaulin sheets while the World Health Organisation will support medical teams in affected areas.

Save the Children warned of a potential increase in dengue cases in the country.

The charity's Sri Lanka country director Chris McIvo said: "We're particularly worried we could start seeing a further increase in the number of dengue cases because of the stagnant water that the floods will leave in their wake."

Pakistan said it was in talks with Colombo to send relief supplies. Islamabad recently gave 10,000 tonnes of rice to Sri Lanka to help drought victims.

The meterological department said the rains ended a prolonged drought that had threatened agriculture as well as hydropower generation.

The flooding is the worst since May 2003 when 250 people were killed and 10,000 homes destroyed after a similarly powerful monsoon, officials said.