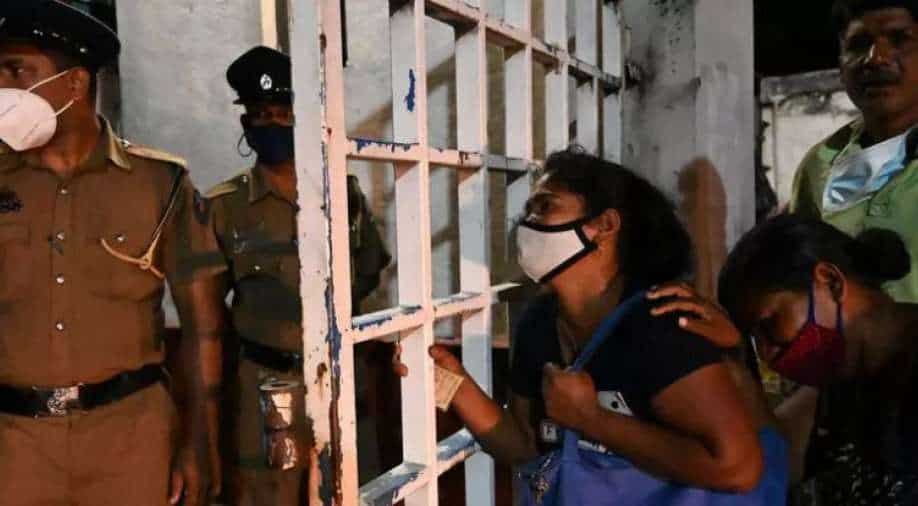 Relatives of an inmate weep at a hospital a day after a prison riot over the surge of coronavirus infections in Sri Lanka. Photograph:( AFP )

Rajapaksa meanwhile sacked Prison Reforms Minister Sudharshini Fernandopulle and shifted her to a new ministry dealing with the pandemic.

Sri Lanka freed hundreds of prisoners and said it would release thousands more after a riot sparked by anger over coronavirus cases at one of its many overcrowded jails left nine inmates dead and 113 wounded.

Guards opened fire at the high-security Mahara prison outside Colombo on Sunday night after prisoners went on the rampage demanding to be freed because of soaring coronavirus cases in jails.

President Gotabaya Rajapaksa on Tuesday granted an amnesty to 637 convicts across the country and Justice Minister Ali Sabry said the government was working on expediting the release on bail of thousands of remand prisoners to ease congestion.

Rajapaksa meanwhile sacked Prison Reforms Minister Sudharshini Fernandopulle and shifted her to a new ministry dealing with the pandemic.

Sri Lanka's prisons house just over 30,000 inmates, nearly three times their capacity, and about 1,200 of them have tested positive for the coronavirus with two deaths, according to official figures.

Jails in the South Asian nation have seen weeks of unrest as the number of Covid-19 cases soared and authorities banned visits and prevented staff from travelling across the country.

One prisoner was killed when he fell while trying to scale the wall of a jail in central Bogambara region.

The number of Covid-19 deaths across Sri Lanka increased six-fold last month to 118, while infections more than doubled to nearly 24,000.

The island nation of 21 million people eased a three-month curfew on June 28, but a second wave hit in October prompting tighter restrictions.

The prison riot was the worst since police commandos controversially shot dead 27 inmates after disturbances at Sri Lanka's main Welikada prison in 2012.

Pak NSA, ISI chief likely to visit US next week for talks on Afghanistan: Report