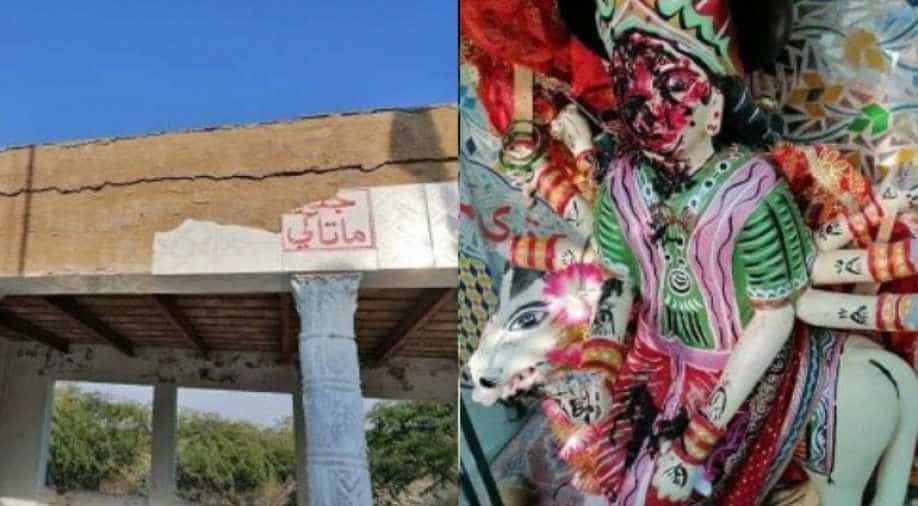 The statue and holy scriptures desecrated as a mob attacked the temple of Mata Rani Bhatiyani in Chachro, Tharparkar. Photograph:( WION )

Four boys aged 15, 13, 13 and 12 have been arrested in Pakistan for their alleged involvement in vandalising a temple in Sindh province.

Four boys have been arrested on Tuesday in Pakistan for their alleged involvement in vandalising a Hindu temple in Sindh province a day before.

The felons, four boys aged 15, 13, 13 and 12 have confessed to the crime and said that they carried out the act to steal money from Mata Deval Bhittani temple in a village near Thar's Chhachro town, where idols of deities have also been desecrated.

An FIR was registered against the vandals on the directions of Thar Senior Superintendent of Police Abdullah Ahmedyar on Monday. The accused were arrested by the Tharparkar police soon after.

After visiting the temple, Chhachro station house office Hussain Bux Rajar claimed that the incident was aimed at disturbing the communal harmony of the area where Muslims and Hindus have been living together peacefully for decades.

Special Assistant to Sindh Chief Minister on Human Rights, Advocate Veerji Kolhi reassured the masses and asked the people of all communities to stay calm. He promised that those responsible for attempting to disturb communal peace in the area will be brought to justice.