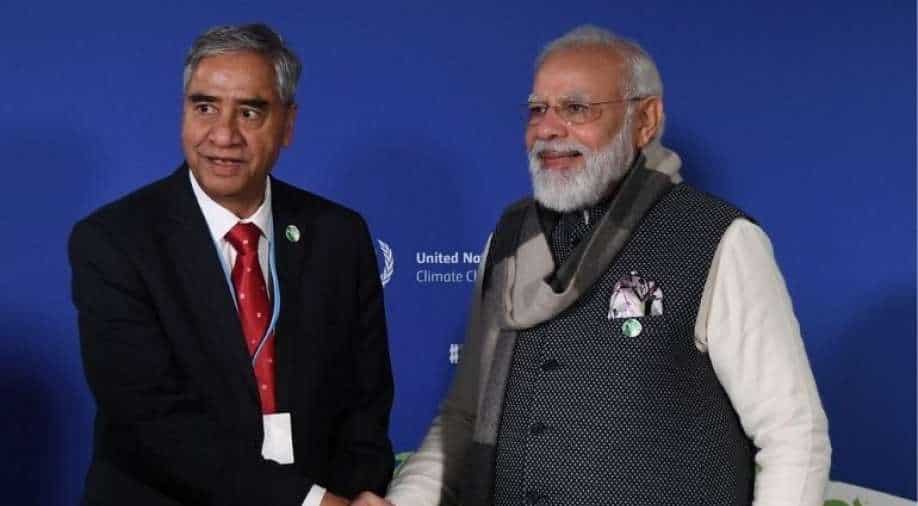 Nepal Prime Minister Sher Bahadur Deuba on Tuesday held his first in-person bilateral meeting with Prime Minister of India Narendra Modi in Glasgow since assuming office in July. On the sidelines of COP26, Nepal Prime Minister met several other world leaders to further strengthen the long-standing ties between the countries.

"Had a productive discussion with PM @SherBDeuba on multiple aspects of the India-Nepal friendship. Subjects relating to fighting the global pandemic and furthering sustainable development are key parts of our bilateral friendship,” PM Modi said in a tweet.

PM @narendramodi met Nepal PM @SherBDeuba in Glasgow. Theirs was a fruitful meeting, in which different issues including a collective effort against COVID-19 and working together to overcome climate change were discussed. pic.twitter.com/eusXw5C56J

The two leaders noted the excellent cooperation between India and Nepal during the pandemic particularly through the supply of vaccines, medicines and medical equipment from India to Nepal as well as by ensuring the free flow of goods across the borders.

“It was indeed great to sit and engage on different issues with PM @narendramodi Ji. I am positive our efforts will show great results in our region in controlling both COVID-19 and climate change. I thank you for the commitment shown,” Nepal PM replied.

It was indeed great to sit and engage on different issues with PM @narendramodi Ji. I am positive our efforts will show great results in our region in controlling both COVID-19 and climate change. I thank you for the commitment shown. @COP26 https://t.co/H0LE9dD0Uh

Both leaders also agreed to work closely towards post-pandemic recovery.

It was their first engagement since Deuba, President of the Nepali Congress, became the prime minister of Nepal in July for the fifth time.

On Monday, Prime Minister Deuba interacted with Lord (Tariq) Ahmad of Wimbledon, the minister of state for South Asia and the Commonwealth and the Prime Minister’s Special Representative on Preventing Sexual Violence in Conflict and both leaders discussed their commitments in combating climate crisis.

“Great to meet Nepal’s Prime Minister @SherBDeuba at COP26. We discussed Nepal’s impressive climate ambition including on forestry and clean energy, and how UK support can help achieve this,” Lord (Tariq) Ahmad of Wimbledon said in a tweet post their talks.

Both the leaders agreed to further to strengthen the friendship between the two countries and PM Deuba thanked the President for their commitment shown to combat climate change.

Nepal Prime Minister also met British Prime Minister Boris Johnson and said, “Wonderful meeting with PM @BorisJohnson. I look forward to strengthening our long-standing bilateral ties, and making efforts to secure the future of our planet together. I sincerely thank the Government of the UK for hosting @COP26 and the commitment shown.”

On the sidelines of COP26, PM Deuba also interacted with US President Joe Biden.

In a tweet, Deuba said, “Delighted to have met President. Nepal looks forward to building on our bilateral ties and contributing to a better and brighter future. I thank you for the commitment shown @COP26.”

In his statement at COP26, Prime Minister Deuba on Monday urged the world leaders to recognise the specific climate vulnerability in the mountains and accord high priority to the mountain agenda in all climate-related negotiations.