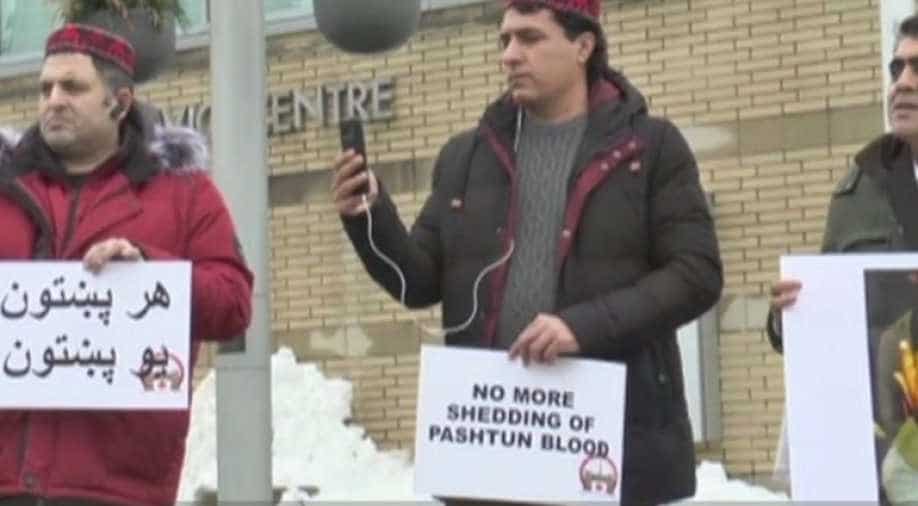 Pashtun Tahafuz Movement started a year ago, whereby a number of young individuals gathered together to demand the release of the missing people including their mothers, fathers, sisters and brothers.

The Pashtun Council Canada on Sunday held protests in Mississauga to condemn the killing of Arman Lonri, a prominent member of the Pashtun movement, and other Pashtun activists by the Pakistan state agency.

Speaking to the media, a member of the Pashtun Tahafuz Movement said, “We have gathered here to express our anger over the killing of human rights activist Arman Lonri, a prominent leader and member of our movement, along with the injustice done to thousands of Pashtuns by the Pakistani state apparatus, who continue to arrest people and put them in private jails, not even in state jails.”

Pashtun Tahafuz Movement started a year ago, whereby a number of young individuals gathered together to demand the release of the missing people (those detained by the Pakistan government), including their mothers, fathers, sisters and brothers, the party member noted.

“But instead of listening to their demands and grievances, the Pakistan government started killing and imprisoning the leaders of the Pashtun Tahafuz Movement,” he added.“Therefore, we Pashtuns from all around the world, demand an international inquiry into such atrocities.

We want the international community and the human rights organisations to initiate this process and force Pakistan to rearrange their policies and change its behaviour towards our civil rights demands. We want the state to stop terrorising and doing civilian atrocities on our soil,” the person said.

Reiterating the same demand, a member of the World Sindhi Congress, present at the protest, stated, “We are here today in solidarity with the Pashtun Council Canada, which is protesting against the murder of Lonri and other innocent Pashtuns by the Pakistan state agency.

Such atrocities have been going on in Pakistan since the last 70 years, with the Balochs, Sindhis, and Bangladeshis.”A Balochistan National Party member said, “We are together with our Pashtun brothers, sharing their grief. We will continue to raise our voice against the termination of civil rights by Pakistan and urge the state to stop the extrajudicial killings.”

Mosque Blast in Kabul kills 2, including an imam