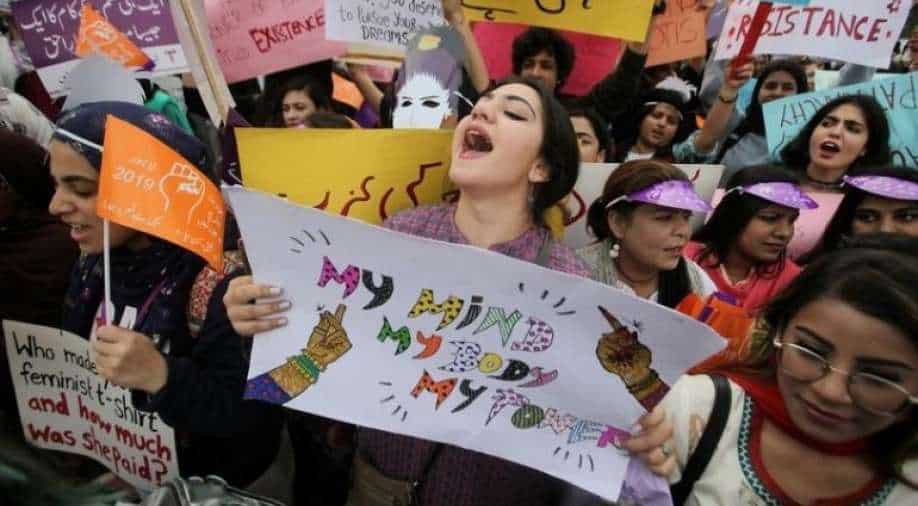 Thousands took part in marches across the country on Monday calling for women's rights, but fake images of the events quickly went viral in deeply conservative Pakistan

Thousands took part in marches across the country on Monday calling for women's rights, but fake images of the events quickly went viral in deeply conservative Pakistan, appearing even on popular television shows.

In one clip, the sound was altered to suggest participants in Karachi were chanting blasphemous slogans against the Prophet Mohammed — an act which carries the death penalty in Pakistan.

Another photo was shared by a politician and shown on television with the false claim that women were waving a French flag -- when it was actually the banner of a Pakistani feminist organisation.

Anti-France sentiments remain rife in Pakistan after French President Emmanuel Macron defended the publication of cartoons depicting the Prophet Mohammed -- a red line for many Muslims.

"This is a way for the conservatives to push us back and the eventual goal here is for the Aurat March to not happen again," said Moneeza Ahmed, an organiser of the Karachi march, who described the threats as "traumatic".

Organisers in Karachi were threatened online, while more high-profile figures in Lahore said they had received "serious death threats" via email, telephone and in text messages.

They did not want to be named for fear of reprisal.

The Human Rights Commission of Pakistan said the "deliberate, vicious campaign" amounted to "an incitement to violence".

The annual rallies calling for women's rights have received a fierce backlash since they first began in Karachi in 2018, including legal challenges to have them banned.

In a society where women have been shot, stabbed, stoned, set alight and strangled for damaging a family's "honour", supporters have been accused of promoting Western, liberal values and disrespecting religious and cultural sensitivities.

Last year, Islamist counter-protesters hurled stones at women as they marched through Islamabad.

A statement signed by feminist journalists and supporters condemned the "malicious circulation" of misinformation against the march, and warned that “using religion and accusing people of blasphemy has serious consequences."

"We’ve seen in the past how such allegations have led to people taking the law into their own hands," feminist author Nighat Saeed Khan told AFP.

Blasphemy is a hugely sensitive issue in Pakistan and while nobody has been officially executed, vigilante mobs have killed people accused of it.

In 2011, a provincial governor was assassinated by his bodyguard for criticising Pakistan’s blasphemy laws and for supporting a local Christian woman who had been sentenced to death a year earlier for blasphemy.

The woman, Asia Bibi, was in jail until 2019 when she was released and allowed to leave for Canada.