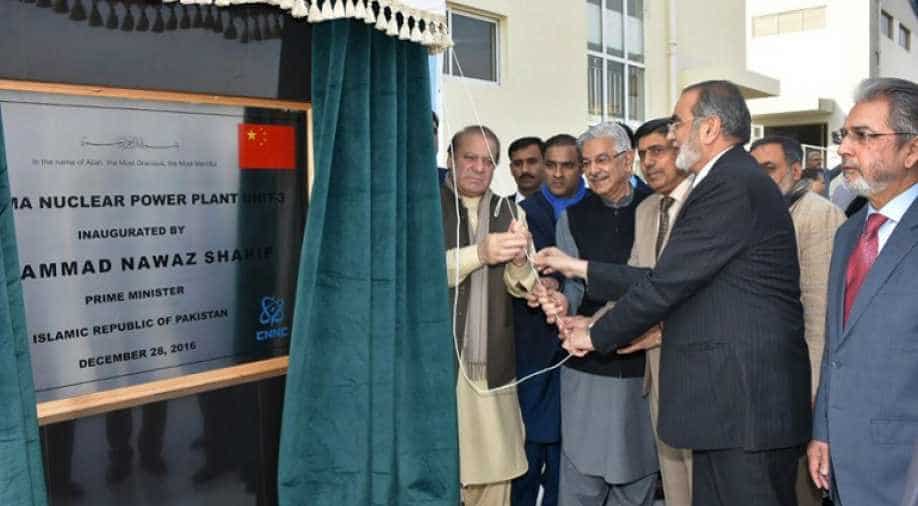 Pakistan's fourth nuclear power plant went online Wednesday, a joint collaboration with China that adds 340 megawatts to the national grid as part of the government's efforts to end a growth-sapping energy deficit.

Pakistan is one of the few developing countries pursuing atomic energy in the wake of the Fukushima nuclear disaster in Japan in 2011, as it seeks to close an electricity shortfall that can stretch up to 7,000 MW in peak summer months, or around 32 per cent of total demand.

The Chashma-III reactor, located some 250 kilometres (155 miles) southwest of capital Islamabad, is the third built as part of a collaboration between the Pakistan Atomic Energy Commission (PAEC) and China National Nuclear Corporation (CNNC).

The country's first nuclear plant was supplied by Canada in 1972, with an installed capacity of 137 MW.

"Today we have crossed an important milestone in the journey to free the nation from scheduled power cuts. I am thankful to Allah and congratulate the entire nation," Prime Minister Nawaz Sharif told an inaugural ceremony attended by Chinese and Pakistani officials.

He added a fourth Chashma plant was expected to be commissioned by April 2017. Two more reactors would follow at an unspecified date in central Pakistan, as well as two giant 2,200 MW power stations in southern Karachi.

Pakistan has been struggling to provide enough power to its nearly 200 million citizens for years, and Sharif has vowed to solve the crisis by 2018.

The energy sector has traditionally struggled to cover the cost of producing electricity, leading the government to divert $2 billion annually as a subsidy, according to a recent report commissioned by the British government.

China meanwhile is ramping up investment in its South Asian neighbour as part of a $46 billion project unveiled last year that will link its far-western Xinjiang region to Pakistan's Gwadar port with a series of infrastructure, power and transport upgrades.

Last week Pakistan's main bourse announced that a Chinese consortium was set to acquire a 40 per cent stake in the stock exchange in a deal estimated at $84 million.

Shanghai Electric announced in August it would buy a majority stake in the utility that supplies energy to Karachi for $1.7 billion, in the country's biggest ever private-sector acquisition.