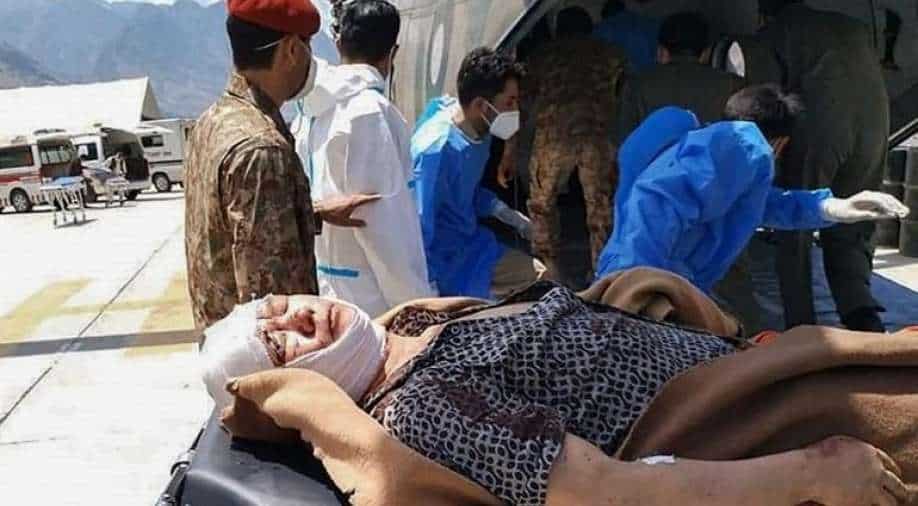 Soldiers move from an army helicopter an injured Chinese national after a bus fell into a ravine following a blast killing 13 people, at a military hospital in Gilgit, on July 14, 2021. Photograph:( AFP )

It comes a day after the all-weather allies, Pakistan and China, offered conflicting views on the possible causes of the fatal blast

Pakistan's Information Minister Fawad Chaudhry on Thursday "confirmed"  traces of explosives in a preliminary probe of a bus blast that killed 13 people, including nine Chinese nationals, and an act of terrorism cannot be ruled out.

Initial investigations into Dassu incident have now confirmed traces of explosives,Terrorism cannot be ruled out,PM is personally supervising all developments,in this regard Govt is in close coordination with Chinese embassy we are committed to fight menace of terrorism together

It comes a day after the all-weather allies, Pakistan and China, offered conflicting views on the possible causes of the fatal blast. While China termed the mishap as a bomb attack, Pakistan stated that the blast was caused by a gas leak.

China is a close ally and major investor in Pakistan, and various anti-Pakistani government militants have in the past attacked Chinese projects.

The Chinese workers killed on the bus were employed at the Dasu hydroelectric project, part of the China-Pakistan Economic Corridor (CPEC), a $65 billion investment plan aiming to link western China to the southern Pakistani port of Gwadar.

CPEC is part of Beijing's massive Belt and Road Initiative. Pakistan and China have been jointly executing several high-value projects under CPEC, which was launched in 2015.

"In this regard government is in close coordination with Chinese embassy, we are committed to fight menace of terrorism together," Chaudhry added in his tweet.

Zhao Lijian, a Chinese foreign ministry spokesman, told a regular briefing earlier on Thursday that China would cooperate closely with Pakistan in the investigation.

On Wednesday, Zhao had called the blast a "bomb attack" but Pakistan said a mechanical failure caused a gas leak that led to the explosion.

Senior Chinese diplomat Wang Yi met Pakistani Foreign Minister Shah Mahmood Qureshi on Wednesday and urged Pakistan to investigate the blast but he stopped short of calling it an attack, the Chinese foreign ministry said on its website.

However, Wang told Qureshi that if it was indeed an attack, Pakistan should immediately arrest the culprits and punish them severely.

Wang, who is China's State Councillor and foreign minister, said "lessons should be learned" and both sides should strengthen security measures for China-Pakistan cooperation projects to ensure their safe and smooth operation.

Wang and Qureshi spoke in Dushanbe, the capital of Tajikistan, on the sidelines of a foreign ministers' meeting of the Shanghai Cooperation Organisation.