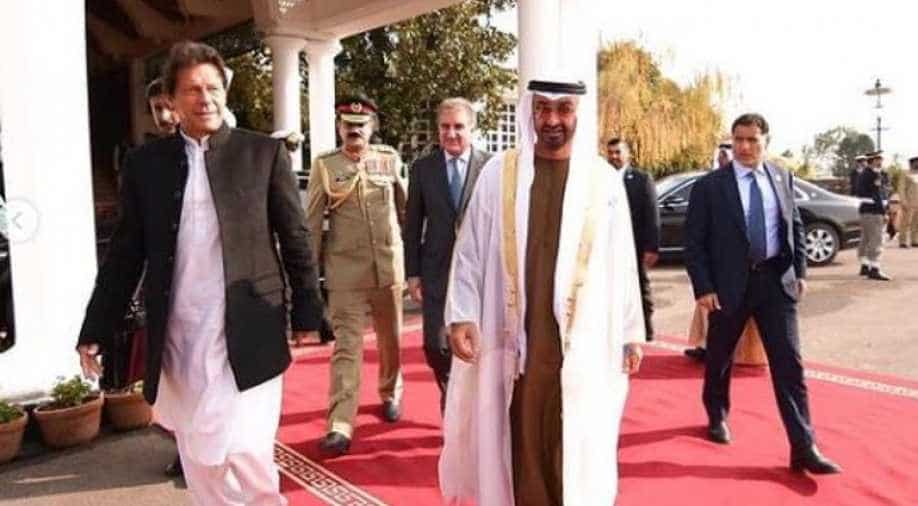 The UAE recently announced aid to Pakistan which is currently suffering from a massive balance of payments crisis.

A formation of air force jets marked Zayed's arrival with a flyby. Zayed was also given a guard of honour at PM House and a 21-gun salute.

The UAE recently announced aid to Pakistan which is currently suffering from a massive balance of payments crisis, which explains the red carpet welcome.

Khan received praises on the internet for personally welcoming the Crown Prince and reviving the ties with UAE.

Crown Prince of Abu Dhabi Sheikh Muhammad bin Zayed al Nahyan arrived in Pakistan at the Invitation of Prime Minister Imran Khan.
PM @ImranKhanPTI received the Crown Prince and is him self Driving him to PM House.#PMIK pic.twitter.com/yS2Xx6ckjs

Prime Minister - Imran Khan gears up for revitalizing the Pakistan-UAE ties, taking up the driving seat as he receives Crown Prince of Abu Dhabi - #ZayedAlNahyan who arrives in Pakistan after 12 YEARS. It's going to be quite an interesting day! 😎 pic.twitter.com/wwWBSvkKKp

Prime Minister Imran Khan receiving the the Crown Prince of Abu Dhabi and driving the car himself. This man is giving it his all for the success of this country and its people. #PrimeMinisterImrankhan pic.twitter.com/kyjMsENenE

Banners on the road depicted the crown prince and read "Zayed in Our Hearts" and "Pakistan-UAE partner in development".

The United Arab Emirates is Pakistan's largest trading partner in the Middle East and a major investment source, Pakistan's foreign ministry said in a statement ahead of the visit.

More than 1.5 million Pakistanis live in the Gulf state and send millions of dollars in remittances back home, it added.

The UAE announced in December it would deposit $3 billion in the central bank of Pakistan to help "enhance liquidity" as the country struggles with a widening balance of payments crisis.

The Pakistani rupee plunged almost five per cent to a record low at the end of November, after what appeared to be the sixth devaluation by the central bank in the past year.

It also secured $6 billion in funding from Saudi Arabia and struck a 12-month deal for a cash lifeline during Khan's visit to the kingdom in October.

A team from the International Monetary Fund visited Pakistan in November to discuss a possible bailout with officials but talks ended without agreement.