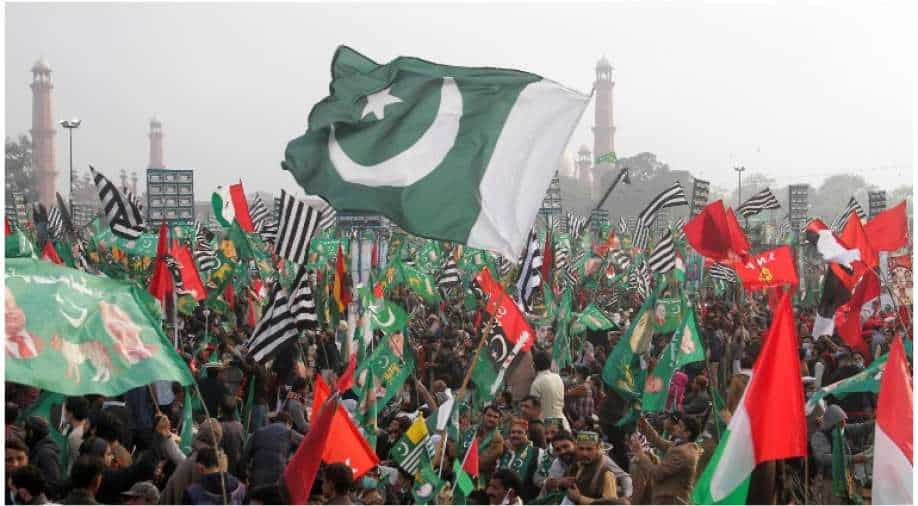 Supporters of the Pakistan Democratic Movement (PDM), an alliance of political opposition parties, wave flags as they listen to the speeches of their leaders during an anti-government protest rally, in Lahore, Pakistan December 13, 2020 Photograph:( Reuters )

Pakistan Democratic Movement (PDM) chief Maulana Fazlur Rehman on Sunday said that the upcoming long march planned by the 11-party alliance on March 26 will be held to demand fresh elections as the Imran Khan`s government is `not acceptable`.

During an interview with Geo News, Rehman asserted that the march would not be so "we simply come and go", adding that Prime Minister Imran Khan will be put under public pressure.

Speaking of the alliance`s anti-government campaign so far, he said: "The people`s war is fought in the people`s court." We never needed to approach any other forum against election rigging," added the PDM chief.

Rehman also denied any `secret talks with anyone`, reported Geo News." I or the PDM do not need to speak secretly with anyone," he said."No one, including NAB, can hold me accountable for anything," Rehman remarked when asked about the National Accountability Bureau`s (NAB) probe against him.

Last year, NAB initiated a probe against the PDM chief for illegally buying expensive land. According to Geo News, Rehman was asked to provide details on what he owns, including any inherent properties.

This comes as the PDM announced a long march against the Imran Khan-led government on March 26.

The march is seen as one of the major components of the opposition`s anti-government movement, which began last year.

"Caravans of long march will leave for Islamabad from across the country on March 26," Rehman said on Thursday while adding that the PDM had decided that "we will contest the Senate elections jointly; there will be a joint strategy for it and we will not compete against each other. We will field joint candidates."