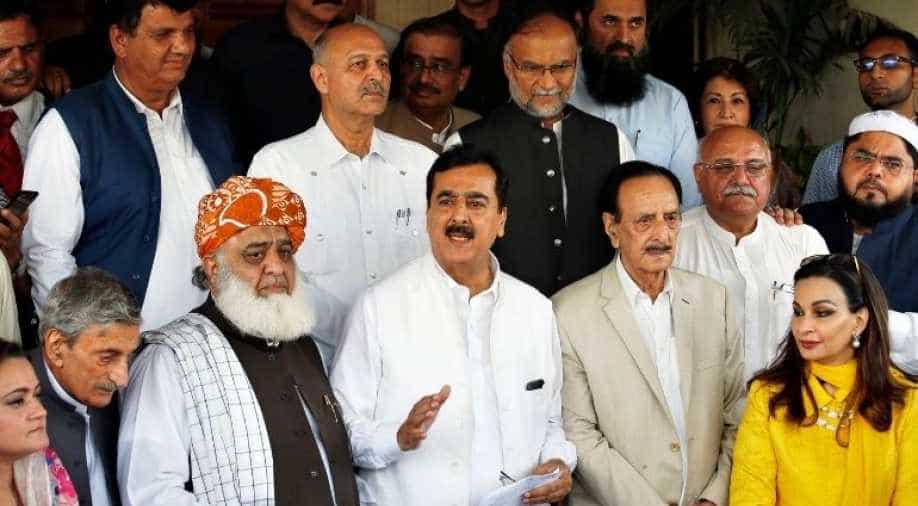 Over 450 workers from Pakistan's Opposition parties have been booked in Lahore and other areas of Punjab province ahead of the first grand anti-government rally on Friday by an alliance formed to oust Prime Minister Imran Khan.

On September 20, the leaders of 11 major Opposition parties announced the formation of the Pakistan Democratic Movement (PDM) and launch of a three-phased anti-government movement under an action plan starting with countrywide public meetings, protest demonstrations and rallies before a 'decisive long march' towards Islamabad in January 2021.

The first anti-government rally is scheduled on Friday in Gujranwala city, some 80 kms from Lahore, followed by another rally on October 18 in Karachi, in Quetta on October 25, Peshawar on November 22, Multan on November 30 and then a rally in Lahore on December 13.

The Opposition leaders announced that they would use all political and democratic options, including no-confidence motions and mass resignations from Parliament to seek "the selected" prime minister's resignation.

The Opposition parties have accused the powerful army of rigging the 2018 elections that brought Imran Khan's Pakistan Tehreek-e-Insaaf party to power.

The Opposition parties are openly opposing the military's interference in politics and elections for the first time in the recent history of the country.

Launching a crackdown ahead of PDM's first major anti-government show, Punjab police got into action and booked over 450 workers, mostly of PML-N, in different parts of Punjab province under COVID-19 violations and also arrested scores of PDM workers.

Police stations in Gujranwala, Mandi Bahuddin and Lahore registered cases against over 450 Opposition workers under sections 269 and 188 of Pakistan Penal Code for holding a public gathering without observing COVID-19 SOPs.

The former prime minister and PML-N supreme leader Nawaz Sharif, who is London since November last year, in a tweet, said that police should refrain from arresting the PDM leaders.

"Police must NOT comply with Imran Niazi's workers, raid their homes or hinder their travel to Gujranwala," he said.
Former premier and PDM leader Shahid Khaqan Abbasi said the government's panic over the first public meeting of Opposition has exposed its reality.

"Blocking roads with containers, raiding corner meetings, arresting PDM workers across Punjab, won't deter the spirits of the masses who have decided to rid the country of this selected and inept government."

He said, "People are starving and struggling to feed their families because of the unprecedented inflation and unemployment created by this government which is the most corrupt government in the history of Pakistan."

Abbasi said no amount of threats, harassment or containers can stop the massive flood of Pakistanis participating in the October 16 public meeting.

PML-N secretary general Ahsan Iqbal said the PTI government is "shaking in its boots over the first Opposition's rally which goes to show how confident it is about itself."

He said the PTI government is doing all it can to "harass and sabotage" the upcoming congregation.

Meanwhile, the government has allowed the Opposition to hold the rally in Gujranwala Stadium with a direction that no speeches would be made against the military and judiciary.

In his back-to-back speeches from London last month, Sharif, who is facing a number of corruption cases, said there was 'a state above the state in the country' and declared that the Opposition's struggle was not against Prime Minister Khan but against those (military establishment) who had imposed such an incapable person upon the nation through a manipulated electoral process.

Since his anti-army rant, the PTI government has banned the media to broadcast his speeches.

Sharif, 70, has been living in London since November last year after he was allowed by the courts and the government to go there for a period of eight weeks for medical treatment. But he did not come back, while his lawyers told the court that he was still recovering.

The Islamabad High Court through newspaper advertisements has asked Sharif to appear before it by November 24 to avoid being declared a "proclaimed offender".