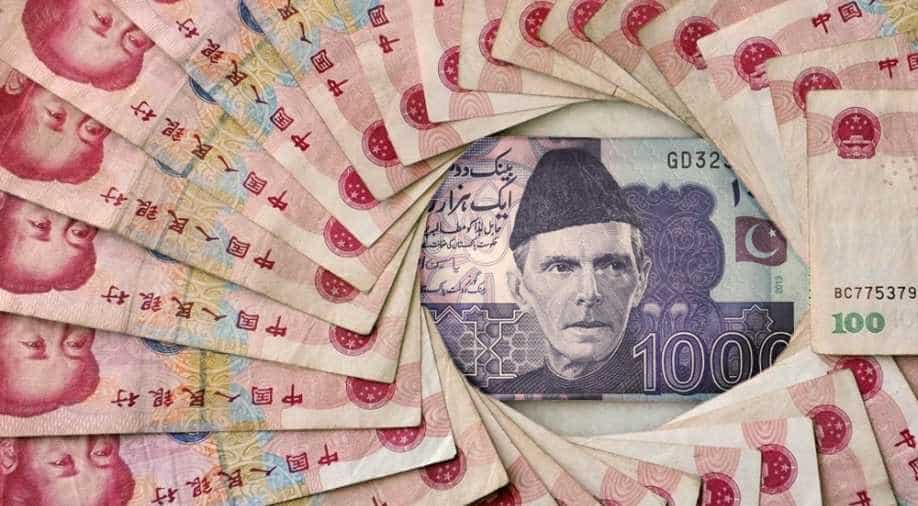 The State Bank of Pakistan has recently put Chinese Yuan as its main currency for trade within or outside Pakistan. Photograph:( Others )

The State Bank of Pakistan has recently put Chinese Yuan as its main currency for trade within or outside Pakistan. They have put a framework within which all the investment transactions, Letter of Credits and other financial instruments can be dealt in Chinese Yuan. This was not unexpected.

In the current scenario of strained relations with the United States and an extremely low forex reserve, Pakistan had to find an immediate alternative. It may be a temporary relief from the crisis but ultimately selecting Chinese Yuan is going to be a suicidal step for Pakistan's economy.

These are not just the assumptions and based on strong facts and figures. Currently, Pakistan is importing good worth US$ 48-50 billion annually out of which a sizeable 30% comes from China through the China Pakistan Economic Corridor (CPEC). Whereas about 5% each comes from Indonesia, US and Japan and about 15% comes from UAE in the form of oil-related products.

When it comes to the inflow of American dollars, Pakistan received about 45% of its 20 billion dollar export reimbursements in the form of US currency. Till date, the top consumer of Pakistani goods is the United States, which imports more than double the amount China does from Pakistan. So, if we mathematically assume the inflow and outflow of US dollars, Pakistan is expected to have an annual deficit of about 5-7 billion US dollars which is going to affect its economy.

The second aspect is the stability of Chinese Yuan. Over last 20 years, the Yuan had been on a fall against the US dollars. The Chinese currency which was touching a figure of 8.74 in 1994 is now hovering around 6.5 per US dollars which is more than a 25% fall. This is likely to fall further because, in the current scenario of dwindling China exports, the Yuan is unlikely to recover and will continue to fall.

The third aspect is the acceptability of Chinese Yuan as a global currency. Though the IMF has already accepted Yuan as a global currency in November 2015, yet it is still the fourth most used currency in the world after US dollar, Euro and Japanese Yen. The People’s Bank of China has been making efforts to stabilise the currency but still, it is likely to reduce China’s competitive advantage as a leading exporter.

As such most American and European companies are looking for alternative manufacturing locations, such as in India and South-East Asia for their products, the adverse impact will be directly on the exports of China.

The fourth and most important aspect is the faith in US dollar since it is a stable currency and is growing constantly. The strength of US economy instils trust in the investors and trading countries.

In the near future, Pakistan's forex reserves shall be constituted mostly by Chinese Yuan and there will be a deficiency of other global currencies like US dollar, Euro and Japanese Yen. Pakistan, which is still struggling to pay its dues with their depleting reserves, is likely to go further bankrupt and will not have any option except to devalue its currency. The Pakistani Rupee which is currently at 112 Rupee per US dollar is likely to go below 150 in the next two years. This will negatively impact its economy and devalue its export reimbursements.

After the completion of CPEC, Pak has to repay its loans to China. As per the current agreement, the repayment has to be in Chinese Yuan. In order to pay China in Yuan, Pakistan has to increase its export to China at terms and conditions put by cunning Chinese traders. While China will use the Pakistani land to establish its manufacturing hub and export the goods through Gwadar, Pakistan is not going to get anything except employment to few thousands of its people as workers in these factories.

The Chinese plans to enhance its imports in the country rapidly. It is already considering Pakistan as one of its main markets. The Dragon is going to sell everything to Pakistan. From goods to services and electricity made in its power plants, using Pakistani resources. It will also put an economic burden on our neighbour in the form of increasing loans and interest payoffs.

This move is directly targeted to make Pakistan as an alternative territory to China and shift its manufacturing pivot to an alternative location. While this seems to be a calculative move by China to become closer to Europe, Middle East and Central Asian markets, this is suicidal for Pakistan.