No room for intolerant Indian in this country, says President Pranab Mukherjee 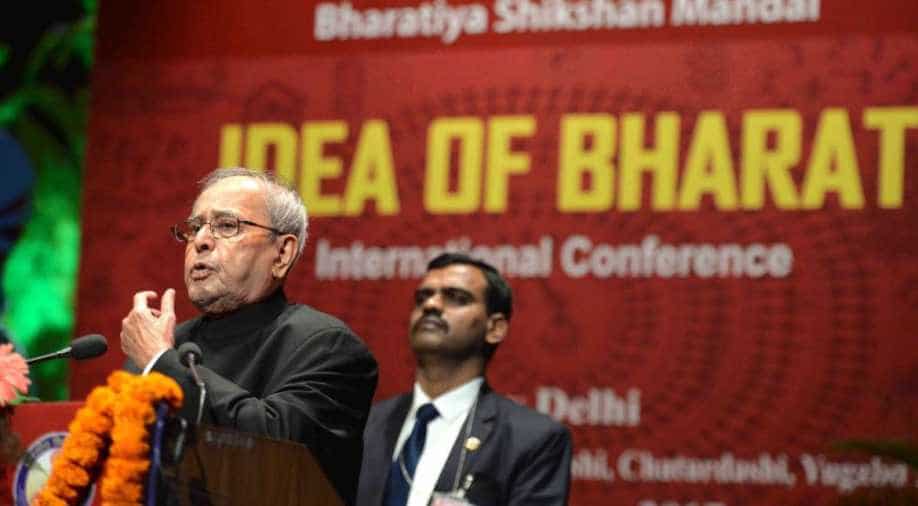 President Pranab Mukherjee said it was tragic to see students caught up in this vortex of violence. Photograph:( Twitter )

Indian President Pranab Mukherjee on Thursday condemned the recent clashes between right-and left-wing student groups in the capital's Delhi University, saying there should be no room in the country for the "intolerant Indian" in a country that had advocated free thought, speech and expression since ancient times.

"Freedom of speech and expression is one of the most important fundamental rights guaranteed by our Constitution. There must be space for legitimate criticism and dissent," the President said in an address to lawmakers.

He advocated free thinking in university campuses and said students and faculties must engage in "reasoned discussion and debate rather than propagating a culture of unrest".

He also said it was tragic to see students caught in the vortex of violence and disquiet.

"It is tragic to see them (students) caught in the vortex of violence and disquiet," President Mukherjee said. He was speaking at the sixth K S Rajamony Memorial Lecture in New Delhi.

Underlining ancient glorious culture of universities in the country, he said, "Our premier institutions of higher education are the vehicles on which India has to propel itself into a knowledge society."

"These temples of learning must resound with creativity and free thinking," he said.

President Mukherjee's comments come amid the backdrop of the ongoing tussle between the right-wing ABVP and Left-backed AISA supporters in the Delhi University.

The President also cautioned against the íntolerance' against women.

His comments came in the backdrop of the raging debate over free speech and nationalism following recent tweets of Gurmehar Kaur, a Delhi University student who faced threats of rape and death after she launched a social media campaign against the ABVP violence.

Gurmehar was also trolled on social media for her statement on Twitter that "Pakistan didn't killed my father but the war did".

Pranab Mukherjee cautioned against the exploitation of "fault lines" in the society, intolerance and attack on women.

In terse comments, Mukherjee said he does not consider a society or State to be civilised if its citizens' behaviour towards women is uncivilised.

"When we brutalise a woman, we wound the soul of our civilisation. Not only does our Constitution guarantee equal rights to women but our culture and tradition also celebrate the feminine as divine," he said.

The President said the country must be conscious of the fact that democracy required constant nurturing.

"At no cost should we allow the exploitation of the fault lines. Those who spread violence must remember that Buddha, Ashoka and Akbar are remembered as heroes in history; not Hitler or Genghis Khan," he said.

The nation and the people must always come first, he said.

"Let us strive to arrest the moral decline in our society and ensure that our core civilisational values find firm root. Let us exert ourselves to strengthen India's pluralism and diversity. Let us be uncompromising in rooting out violence, prejudice and hatred," he said.

President Mukherjee, who has been in public life for almost six decades, advised lawmakers and political activists to listen, engage, learn from people and respond to their needs and concerns.

He also asked lawmakers not to take people for granted and to raise issues of concern to the people as well as find solutions to their problems.

"No one who holds any elected office has been invited by the voters to occupy that office. Each one has gone to the voters and pleaded for their votes and support. The trust placed by the people in the political system and those elected should not be betrayed," he said.

President Mukherji also criticised the ruckus in the Tamil Nadu state assembly during chief minister Palaniswamy's trust vote and said legislatures must not turn into arenas for combat.

"Floor tests are not meant to be muscle tests. The opportunity to represent the people is not a right or entitlement but a moral obligation and duty. Our elected representatives owe it to the people of our country to act as models of exemplary conduct," he said.

He said if the Parliament and legislative assemblies became dysfunctional, it would result not just in the paralysis of those institutions but create an adverse impact across the system.

"The debate and discussions which ought to take place in the open in the House of Parliament and assemblies cannot be replicated elsewhere. When they cease to function effectively, issues spill out onto the streets. The very basis of our democracy gets undermined," he said.

President Mukherjee said although the production of wealth must necessarily be one of the predominant objectives of state policy, it must be imbued with the principle of equality on which there can be no compromise.

"An egalitarian society can only be created when growth is inclusive. It is important to ensure that there is justice and equality of opportunity and the state does not create conditions in which the privileged few gain at the cost of the multitudes who suffer endemic poverty," he said.