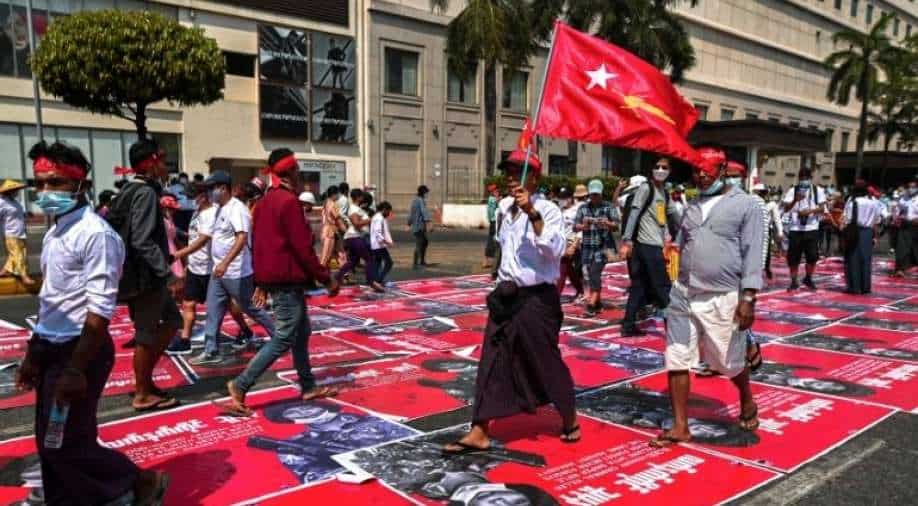 People step on placards showing the photo of an alleged Myanmar Army sniper during a protest against the military coup in Yangon, Myanmar, February 22, 2021 Photograph:( Reuters )

The leader of Myanmar's junta on Tuesday called for quick efforts to revive the economy of the country. Currently, the country is facing global backlash for the coup and reported cases of repressing voices of democracy.

The leader of Myanmar's junta on Tuesday called for quick efforts to revive the economy of the country. Currently, the country is facing global backlash for the coup and reported cases of repressing voices of democracy.

On Monday, a general strike shut businesses calling for more focus on the economy, while huge crowds continued to gather in order to denounce the coup which began on February 1.

On Tuesday, the Group of 7 affluent countries condemned the oppression of protesters. "Anyone responding to peaceful protests with violence must be held to account," group foreign ministers said in a joint statement.

On Tuesday, no violence was reported, and protesters gathered in much smaller numbers. In addition, marches in favour of the military were also seen.

General Min Aung Hlaing, the military chief on Monday during a meeting with the ruling council urged for a decrease in imports and state spending while asking for the exports to be increased.

"The council needs to put its energy into reviving the country's ailing economy. Economic remedy measures must be taken," state media said.

The army took control of the country after alleging fraud in elections that took place on November 8. Suu Kyi was detained soon after, along with the party leadership. So far, the electoral commission has dismissed complaints of fraud.
Three protesters have been shot and killed in the protests. In addition, a police officer has also died owing to the injuries he suffered during the protests.