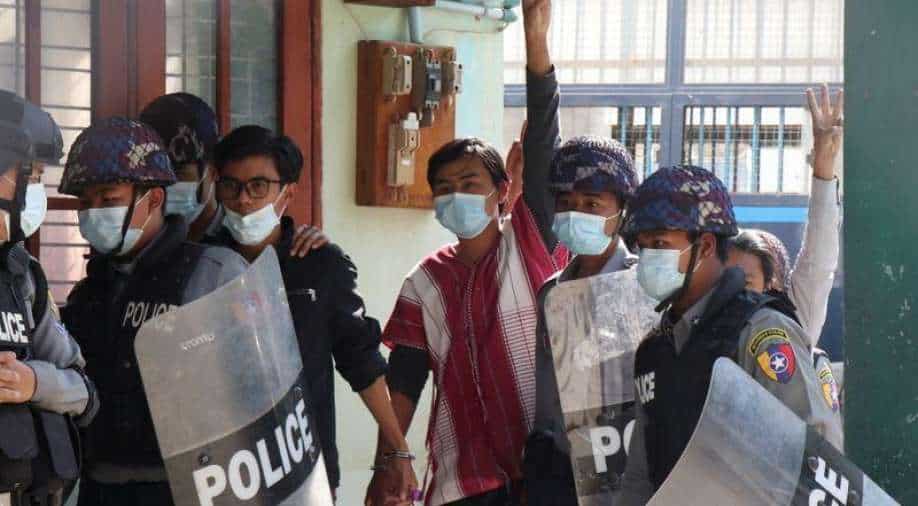 Myanmar police arrested 79-year-old Win Htein, a stalwart of Suu Kyi, who was repeatedly imprisoned during their decades of struggling against previous juntas that led to the unsteady transition to democracy that began in 2011.

Another key aide of ousted leader Aung San Suu Kyi was among the 30 people who were detained over pot-banging protests against a military coup as shows of anger gathered pace on Friday. The said protesters were arrested in Myanmar's second city of Mandalay.

Myanmar police arrested 79-year-old Win Htein, a stalwart of Suu Kyi, who was repeatedly imprisoned during their decades of struggling against previous juntas that led to the unsteady transition to democracy that began in 2011.

International pressure on the junta was also growing with the UN Security Council calling for the release of Suu Kyi and other leaders and US President Joe Biden considering sanctions on the ruling generals.

Eleven Media quoted Maung Maung Aye, deputy head of the regional police force, as saying they were accused of breaking a law against "causing noise in public streets". A teenager was among others arrested elsewhere over the noisy protests.

Following Win Htein's arrest, around 200 teachers and students at Yangon's Dagon University staged a rally where they displayed a three-finger salute borrowed from Thailand's democracy movements, and sang a popular revolution song.

In addition to this, a representative of Suu Kyi's National League for Democracy said Friday she was being held at her residence in Naypyidaw, the country's capital, and was "in good health".

Monday's putsch ended the country's 10-year dalliance with democracy that followed decades of oppressive junta rule, and sparked outrage and calls by US President Joe Biden for the generals to relinquish power.

A similar protest took place across town in Yangon University. In the capital Naypyidaw, dozens of employees from several government ministries posed for group photographs wearing red ribbons and flashing the democracy symbol.

Ahead of his arrest, Win Htein told local media the military putsch had called on people in the country to "oppose (the coup) as much as they can".

According to the Assistance Association for Political Prisoners (AAPP), a Yangon-based group that monitors political arrests in Myanmar, more than 130 officials and lawmakers have been detained.

Telecom providers in the country were ordered to cut access to Facebook, the main means of communication and accessing the internet for millions of people in Myanmar.

With Facebook stifled, more Myanmar people have moved to Twitter in recent days or started using VPN services to bypass the blockade.

A so-called Civil Disobedience Movement has gathered steam online, calling on the public to voice opposition every night by banging pots and clanging cymbals to show their anger

So far, at least 14 activists and prominent pro-democracy figures have been arrested, according to AAPP.

The nephew of filmmaker Min Htin Ko Ko Gyi -- who has previously been jailed for criticising the military -- confirmed Friday his outspoken uncle had been picked up on the morning of the coup.