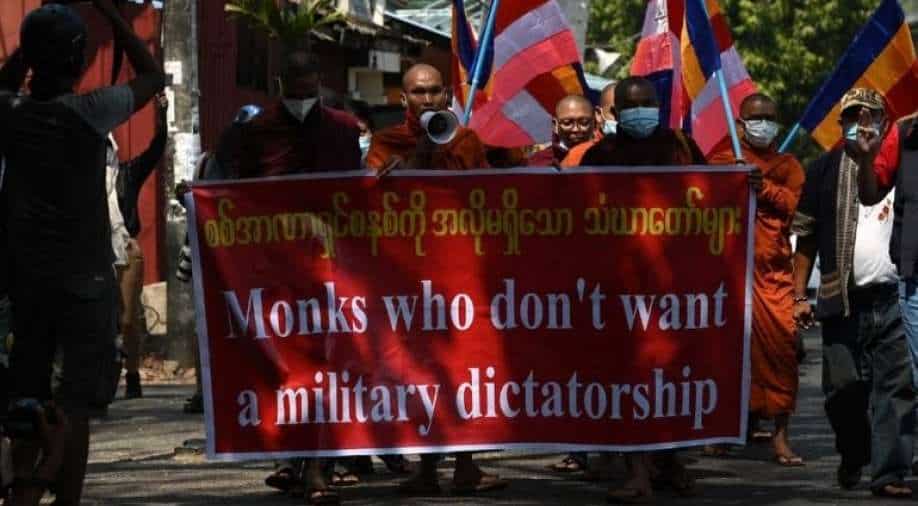 Buddhist monks join a demonstration against the military coup in front of the United Nations (UN) office in Yangon on Tuesday. Photograph:( AFP )

About 20 monks in dark red robes walked through the streets of the main city of Yangon to a United Nations office, urging citizens to join their protest

A group of Buddhist monks marched against Myanmar's military junta on Tuesday, joining a campaign for an end to the generals' rule and for the release of detained leaders of the ousted elected government, including Aung San Suu Kyi.

About 20 monks in dark red robes walked through the streets of the main city of Yangon to a United Nations office, urging citizens to join their protest.

"I would like to request that all citizens help eliminate the power of the military dictatorship until we can get rid of this system," said one of the protesting monks, Sandar Thiri.

Monks held an English-language banner with the message: 'Monks. who don't want a military dictatorship'.

Some wore red masks to ward off the coronavirus and carried signs saying 'reject military coup'.

Thousands of people from all walks of life have come out onto the streets of towns and cities across the country to protest against the February 1 military overthrow of the government of veteran democracy champion Suu Kyi.

Historically, monks in the predominately Buddhist country have helped organise communities, and at times led opposition to authority, in particular during British colonial rule.

Big pro-democracy protests in 2007 were called the 'Saffron Revolution' because of the prominent involvement of monks.

Those protests, though suppressed, ultimately led to the military's decision to gradually withdraw from politics, a process brought to a halt by this month's coup.

The army took power alleging that its complaints of fraud in a November 8 general election, in which Suu Kyi's party had won a landslide, were being ignored.

It guaranteed on Tuesday that it would hold an election and hand over power, denied its removal of the government was a coup or that its leaders were detained, and accused protesters of violence and intimidation.