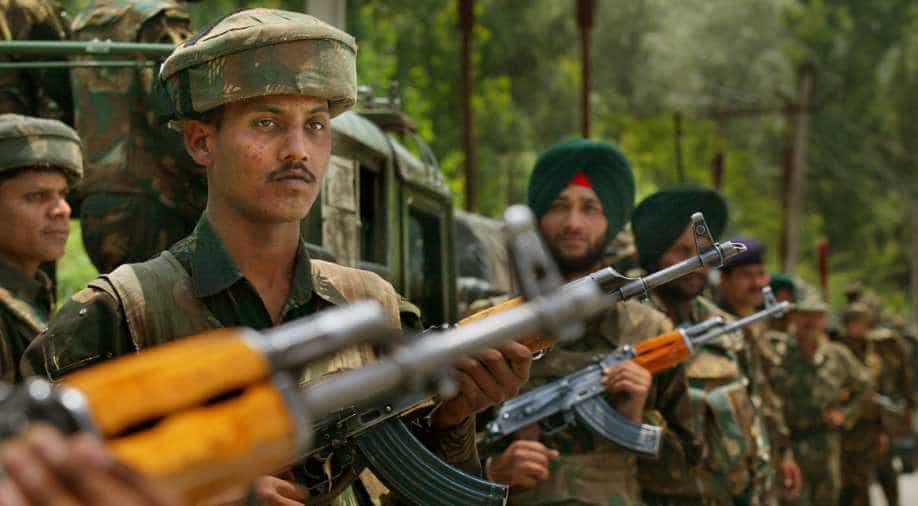 'The first installment in revenge for killing Afzal Guru', a note recovered from a militant's body read Photograph:( Getty )

Papers recovered from bodies of the militants who attacked an army camp in Nagrota on Tuesday suggest the attack was carried out to avenge the death of 2001 Parliament attack mastermind Afzal Guru and that the terrorists were affiliated to Pakistan-based terrorist outfit Jaish-e-Muhammad (JeM).

"The first instalment in revenge for killing Afzal Guru," a note recovered from a militant's body read.

Militants dressed in police uniforms attacked the army camp early Tuesday morning and  held women and soldiers captive. Seven Indian Army soldiers, including two officers, were killed in the ensuing encounter. BSF forces gunned down three militants in Samba near the LoC the same day. Four security personnel were injured after an encounter that lasted several hours. The Ministry of Home Affairs (MHA) is considering handing over investigation of the two incidents to the National Investigating Agency.

The army chief also paid tribute to those killed in the strike.

A bomb disposal team also destroyed "blinds" (unexploded shells) at the site of the terror attack during the combing operation.

The area has to be cleared... Operation is on to see whether there is presence of any other militant in the area. We cannot take chances," a senior army officer said.

Ammunition, explosives and dangerous chemicals similar to those recovered from the militants involved in the Uri attack have also been obtained, raising questions of whether the terrorists were planning a chemical attack.

A senior official of the country's border security force (BSF) said the militants used a tunnel to enter the Indian border and carry out the attack in Nagrota near the city of Jammu, Reuters reported.

"Today morning only, during a thorough search of the area, we were in a position to detect a very small tunnel," he told the press in New Delhi.

Sharma said his force recovered a huge cache of arms and ammunition including seven Improvised Explosive Devices from the slain militants.

"We recovered three AK-47s, 20 loaded magazines of AK-47, 517 rounds of ammunition and some empty cartridges. One 8mm pistol with its magazine, a camouflage uniform, two radio sets, number of GPS, mobile and two power banks and 20 hand grenades," said Sharma.

Afzal Guru carried out an attack on the Indian parliament in 2001 and was hanged to death  in 2013 after his conviction.