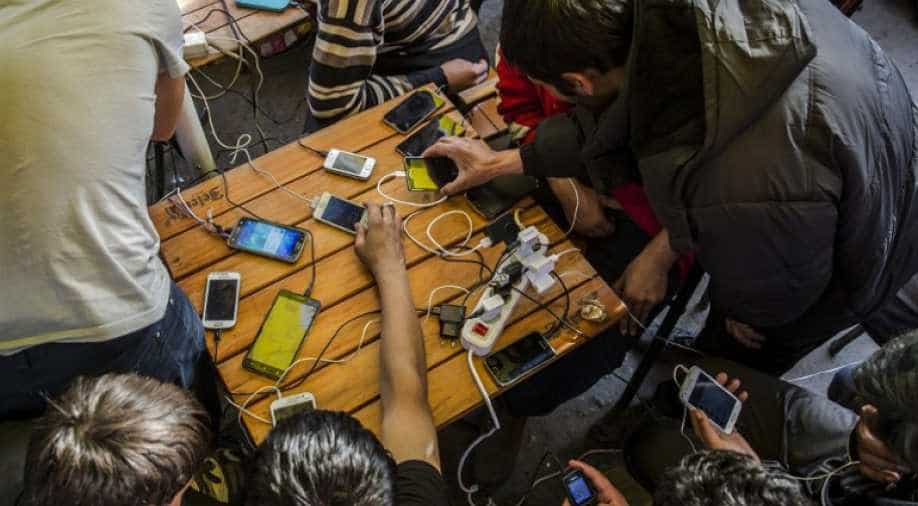 The state's home department had on April 26 banned 22 social media applications and sites including Facebook, Whatsapp and Twitter in a bid to curb street protests. (Representative image) Photograph:( AFP )

Although the ban initially limited the common man's access to these applications, the discovery of Virtual Private Networks (VPNs) by the people has made the ban redundant

The month-long ban imposed by the Jammu and Kashmir government on social media applications and internet sites to curb the unrest in the valley has come a cropper with almost everyone accessing these platforms using Virtual Private Networks.

The state's home department, through an order issued on April 26, had banned 22 social media applications and sites including Facebook, Whatsapp and Twitter in a bid to curb the street protests in Kashmir.

"In the interest of maintenance of public order, the government hereby directs all internet service providers that any message or class of messages to or from a person or a class of persons relating to any subject or any pictorial content through the following social networking sites shall not be transmitted in Kashmir Valley with immediate effect for a period of one month or till further orders, whichever is earlier," Principal Secretary, Home Department R K Goyal had said.

"On careful examination of all relevant factors, it is observed that the use of social media platforms, which are being misused by anti-national and anti-social elements by transmitting inflammatory messages in various forms are immediately required to be regulated/curbed," the order read.

While the government order put the onus on Internet service providers to ban the access to these sites, it was silent on the possibility of users being able to bypass the ban.

Top politicians and officials of the government, including the director general of police have been using some of the banned applications like Twitter to put out posts on the current situation in the valley.

Opposition National Conference leader and former chief minister Omar Abdullah is one of those seemingly unaffected by the ban. He frequently tweets about the developments in Kashmir and other parts of world.

The ruling PDP has also used Twitter to put out press releases and at times counter the criticism levelled by opposition parties.

Both the National Conference and PDP entered into a war of words on Twitter yesterday over the raising of 'azaadi' (freedom) slogans at a self help group function presided over by Chief Minister Mehbooba Mufti.

Some of the senior police officials of the state frequently use Whatsapp and Facebook to put out updates.

"Whatsapp is supposed to be out of bounds for internet users in Kashmir but we still receive press releases and invitations for official functions through this application. They probably know the ban has been ineffective ....It is high time the government revokes it," Yusuf Jameel, a journalist, told PTI.

Although the ban initially limited the common man's access to these applications, the discovery of Virtual Private Networks (VPNs) by the people has made the ban redundant.

"The use of VPNs has helped in accessing most of the banned sites ...These applications and sites have become the communication lifeline not only in Kashmir but across the world," Umar Bhat, a businessman, said.

Bhat, however, loathed the slow internet speed in Kashmir which has made online business transactions almost impossible.

"I frequently travel between Srinagar and Delhi and the difference in the internet speed is huge. This has severely affected my business as I find it difficult to make online transactions," he said.