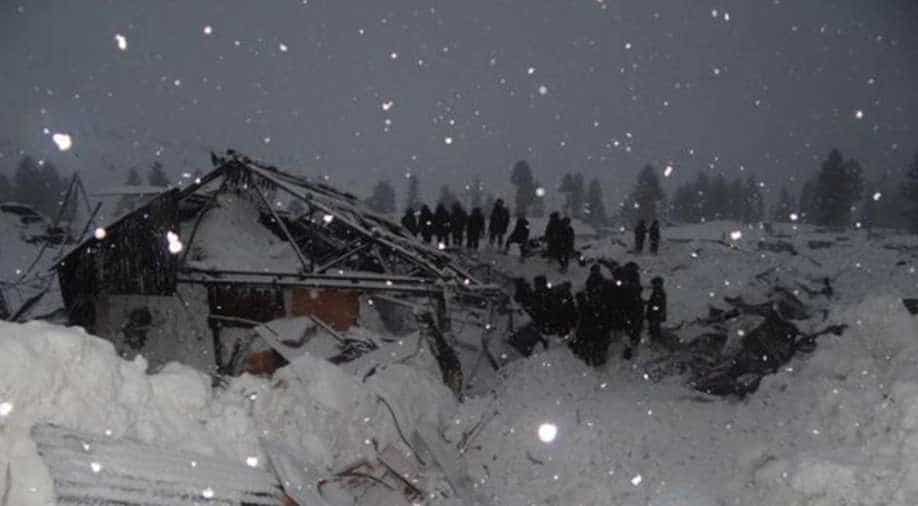 The five soldiers of a patrol were immediately trapped as the snow track caved in. (Representative image) Photograph:( WION )

All five Indian Army soldiers trapped under snow in Kashmir's Macchil sector near capital Srinagar have been rescued, the army said.

An army officer told AFP on condition of anonymity that their condition is critical and hostile weather has prevented them from being flown to a base hospital in the main city of Srinagar 140 kilometres away.

"All the five soldiers were successfully rescued and are undergoing treatment," Colonel Rajesh Kalia told AFP.

The soldiers were trapped after the snow-track caved-in as they were making their way to a border post near the Line of Control, the border that divides India and Pakistan.

Authorities have issued a high-danger avalanche warning in the hilly parts of snow-bound Kashmir Valley in view of fresh snowfall.

An official spokesman told ANI the warning has been issued for avalanche-prone slopes of Kupwara, Bandipora, Baramulla, Ganderbal, Kulgam and Budgam and Kargil district of Kashmir.

"People are advised to keep clearing the snow deposition from rooftops of their houses/bunkers to avoid damages," it said.

The soldiers were going to a border post along the Line of Control (LoC) that divides the territory with Pakistan, when the track they were following caved in, army spokesperson, Colonel Rajesh Kalia earlier told AFP.

The soldiers belong to 56 Rashtriya Rifles and were on routine counter-insurgency duties when the mishap occurred, NDTV reported citing sources.

Power and communication lines have also been cut in some areas, NDTV reported.

An avalanche warning for the same period has also been issued for avalanche-prone slopes in Kullu, Chamba, Lahaul and Spiti and Kinnaur districts of Himachal Pradesh. People have been advised to keep clearing the snow deposition from the rooftops of their houses or bunkers to avoid damage.

Twenty-one people, including 15 army men, have been killed since Wednesday due to avalanches and snowfall-related incidents in the Kashmir Valley.

15 Indian soldiers died when a patrol and two camps were hit by avalanches in the north of the territory, that is also claimed by Pakistan, on Wednesday.

It took rescuers two days to retrieve their bodies from under tons of snow.

Five civilians, including four members of a family, were also killed this week when an avalanche struck their their home as they slept. A lone survivor was rescued, AFP reported.

Dozens of Indian and Pakistani soldiers lose their lives due to avalanches almost every winter along the LoC.

Kashmir has been witnessing one of the most severe winters in recent decades, with heavy snow across the territory and temperatures dipping to minus seven degrees Celsius.