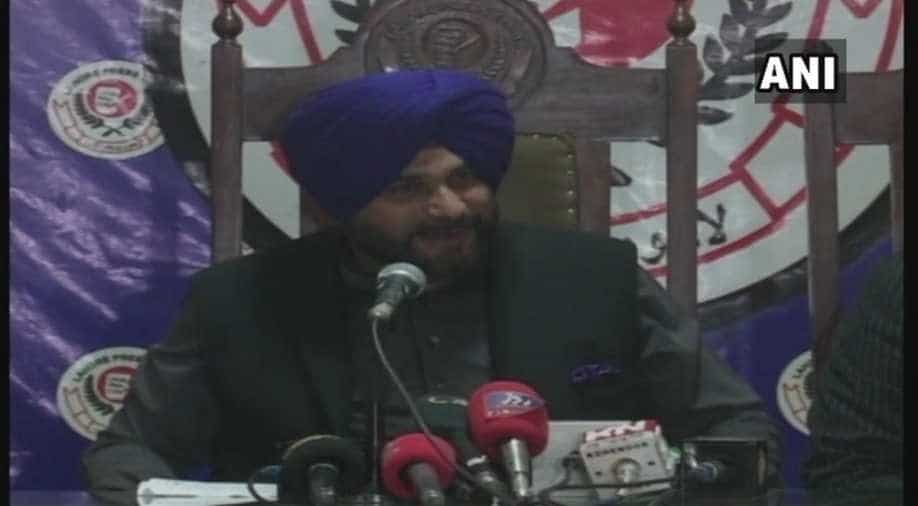 Sidhu addressing the the media persons in Lahore.  Photograph:( ANI )

Punjab Cabinet Minister Navjot Singh Sidhu on Tuesday said that Kartarpur corridor will be a bridge between Pakistan and India and erase enmity between the two neighbouring South Asian countries.

The corridor will promote peace and prosperity and foster people to people contact, he said.

''I see infinite possibilities of peace, of prosperity, of opening up of trade relations,'' said former cricketer-turned-politician.

Sidhu was invited by Pakistan Foreign Minister Shah Mahmood Qureshi to attend the groundbreaking ceremony of Kartarpur Corridor on November 28.

Earlier, Sidhu paid obeisance to Gurdwara Kartarpur Sahib in Pakistan from the Indian side of the international border.

Sidhu has drawn much flak from within the Congress party over his decision to visit the ground-breaking ceremony of Kartarpur Sahib Corridor on Wednesday.

"Ardas (prayers) of 13 crore `Guru Nanak Naam Leva Sangat`, which have been praying for the past 70 years for a darshan of gurdwaras on Pakistan side has borne the fruit," said Sidhu.

Swaraj citing her prior commitments turned down the invite. Union Minister Harsimrat Kaur Badal and Minister of State for Housing and Urban Affairs Hardeep Singh Puri would represent the Indian government at the groundbreaking ceremony of Kartarpur Sahib Corridor on Pakistan side.