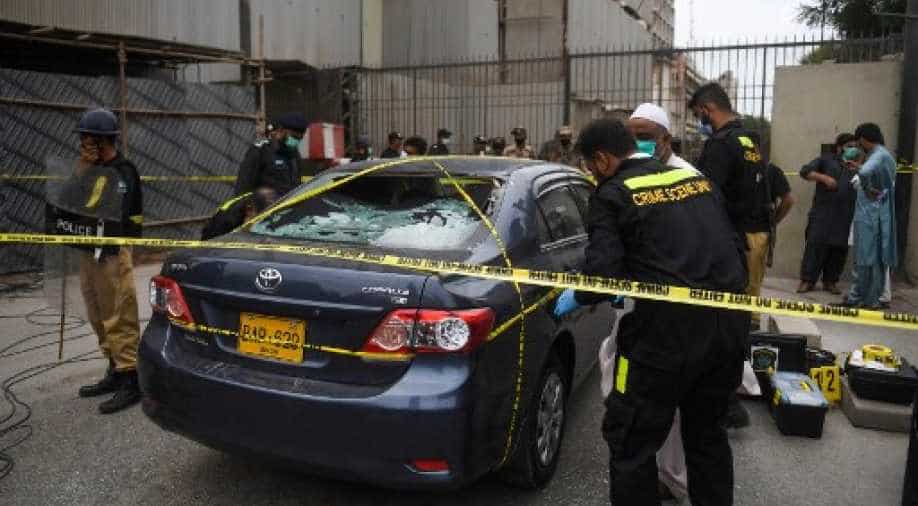 Forced disappearances are the norm. The coronavirus pandemic has broken the back of the province. The death toll continues to rise. The locals remain cut off from the world.

First, the economic crisis, then the coronavirus pandemic and now, an attack on its Karachi Stock Exchange.

The attack not only targets Pakistan but, its chief creditor China too.

Video from inside the Pakistan Stock Exchange building - intense firing can be heard pic.twitter.com/7xxYW92nHo

This horrific sound of gunshots is coming from inside the Karachi Stock Exchange. Four gunmen drove up to the home of Pakistan’s financial hub on Monday morning. They were inside this black car.

After driving to the gate --- two gunmen managed to enter the parking area. A gun battle ensued. All officials and traders took shelter inside during the shootout. By the end of the one-hour long firefight, all four gunmen were dead.  A shaken director of the Karachi Stock Exchange appeared before the media to make a statement.

Hours after the attack, the Balochistan Liberation Army took responsibility for the attack.  A group that has been raising the demand for an independent Balochistan.

Recently, this group targeted Chinese investments in Pakistan.  In 2018, the B.L.A. allegedly tried to storm the Chinese consulate in Karachi.

Last year, the group attacked a five-star hotel --- financed by the Chinese in Gwadar.

The attack on the Pakistani stock exchange targets China too.

Earlier, a Chinese consortium acquired a 40 per cent stake in the PSX - the company running the stock trading platform - at Rs 28 per share in January 2017.

A Chinese consortium had bought a 40 per cent stake in the PSX three years ago. Last year, Chinese investors were considering investing up to two billion dollars in the Pakistani stock market.

The B.L.A. has strongly opposed China’s belt and road initiative. Especially, the investments in Balochistan.  Since the day the projects were announced --- Balochistan has caught the world’s attention. Tourists and journalists began visiting the province. Triggering major concerns among the locals.

They fear that CPEC will turn the Baloch people into a minority. The Baloch liberation army has resorted to violence to push china back.

As a province -- Balochistan is struggling.  Richest in natural resources, lowest in developmental projects and govt priorities. Balochistan's wealth is being drained by Pakistan. The Pak military has been running a brutal campaign of repression.

Forced disappearances are the norm. The coronavirus pandemic has broken the back of the province. The death toll continues to rise. The locals remain cut off from the world.

Last week, students in Quetta were beaten up by the police. They were demanding access to the internet --- to attend their classes.

Now, the attack on the stock exchange --- only brings the focus back on Pakistan's oppression of Balochistan.