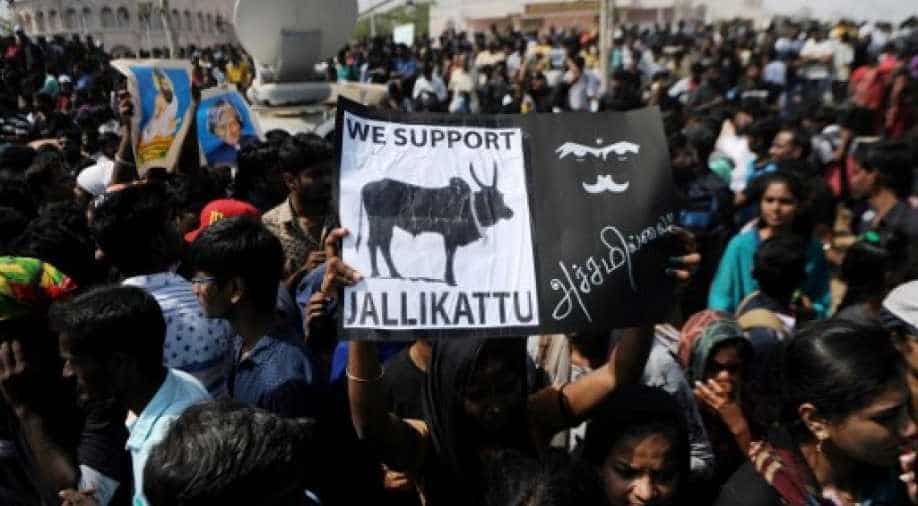 The people of Tamil Nadu have been putting pressure on the local government to ban animal rights group PETA. In photo: Indian students hold placards against the animal rights organisation PETA during a demonstration. Photograph:( Getty )

The chief minister of India's southern state Tamil Nadu will flag off Jallikattu, an ancient bull-taming sport, from Madurai district on Sunday (January 22). The protesters, who gathered at the Marina Beach, appeared to be in no mood to relent and demanded a permanent solution.

Ministers in O Panneerselvam's administration will inaugurate the sport across the state after the state governor approved an emergency ordinance to hold the bull-taming sport, succumbing to a widespread agitation across the state.

The chief minister has also appealed to the people of the state to participate in Jallikattu events across the state. He also thanked PM Narendra Modi-led federal government for its support to the emergency law on Jallikattu.

Panneerselvam said Modi "was responsible for the approval of several Central government departments and President Pranab Mukherjee in a single day," PTI reported.

On behalf of Government and people of TN, thank you for your support in enabling Jallikattu to be held in Tamil Nadu once again - CM to PM.

Since ordinance will last for 6mnths,in coming assembly session will formulate new law so #Jallikattu takes place without hindrance:TN CM

Jallikattu was banned by India's Supreme Court and the federal government after the People for Ethical Treatment of Animals (PETA) cited animal cruelty concerns. PETA had told the court the bulls were drugged and underwent violence during the annual harvest festival of Pongal in India's southern state of Tamil Nadu.

But the public at large was up in arms and launched a statewide agitation seeking overturning the ban. They said the Jallikattu ban was an assault on Tamil culture and pride and piled pressure on the local Tamil Nadu government to redress the problem and take action against PETA, an animal rights group.

The Tamil Nadu government since has gone on an overdrive to ensure that the ban is lifted and consequently appease a seething mass of agitators across the state.

The local government in India's southern state is looking to impose a ban on PETA following the Jallikattu fiasco in recent days.

“We will also work towards banning PETA. That’s the other commitment we have made and we will work towards it. As our general secretary Chinamma (AIADMK chief VK Sasikala) has committed, it will happen,” the minister said.

How the Tamil Nadu govt obtained the go-ahead

Panneerselvam said the Tamil Nadu Government issued an ordinance after obtaining the president's assent as envisaged under Article 213 of the Constitution. He added that President Pranab Mukherjee's approval to amend the Prevention of Cruelty to Animals Act, 1960 by Tamil Nadu was received last night.

"The assent for the ordinance (amending the PCA Act) has been obtained from govenor also," he said.

The federal government had notified "bulls" under section 22 of the PCA Act, 1960 which prohibited training and exhibiting bulls as performing animals. In 2014, India's highest court altogether banned the sport. The court had also struck down the 2009 Act of the Tamil Nadu government regulating jallikattu, stating that it was repugnant to the PCA Act 1960.

Tamil Nadu had filed a review petition against the ban which was also dismissed by the top court in December 2016.

In 2015, AIADMK legislators urged the Indian parliament to allow an amendment by the federal government to allow Jallikattu. When these effors failed, former chief minister Jayalalithaa had urged the promulgation of an ordinance on December 22, 2015 to allow the sport.

Following these efforts, the federal government issued a notification in Janaury 2016 allowing Jallikattu which was subsequently stayed by the top court.

After that, Tamil Nadu had batted for an ordinance on the matter to allow the sport.

Anbumani Ramadoss, member of Parliament's Lower House, Lok Sabha, today met President Pranab Mukherjee for a "permanent solution" by way of a parliamentary amendment to the Prevention of Cruelty to Animals Act (PCA), 1960.

Ramadoss, who met the president in New Delhi, said the emergency ordinance was just a temporary solution and it could be quashed by the top court anytime.

"We want an assurance from the central government that it would amend the PCA Act in the upcoming session of parliament if the supreme court quashes the ordinance sometime later," he said.

Senior Congress leader Salman Khurshid said the ordinance would not solve the problem since the matter could still be challenged in the top court which could give an adverse decision on the matter.

"This will not resolve the problem, there has to be a long term solution. This matter could still go to the SC, & we could get an adverse decision from SC,for those who're agitation against decision," Khurshid told ANI.

Tamil Nadu Governor Ch Vidyasagar Rao today said he was satisfied that an ordinance was the most appropriate route to bring back Jallikattu in the wake of massive protests across the state seeking nod for holding the event.

Since the issue is resolved through ordinance, "The Governor is confident that life would return to normalcy and all (protesters) would return to their homes with Jallikattu around the corner," Raj Bhavan said in an official release here.

The Governor's statement assumes significance amid the claims of protesters and Opposition parties that ordinance is not a "permanent solution" to hold the bull-taming sport.