Blasphemy laws being used to harass Christians in Pakistan: Activists 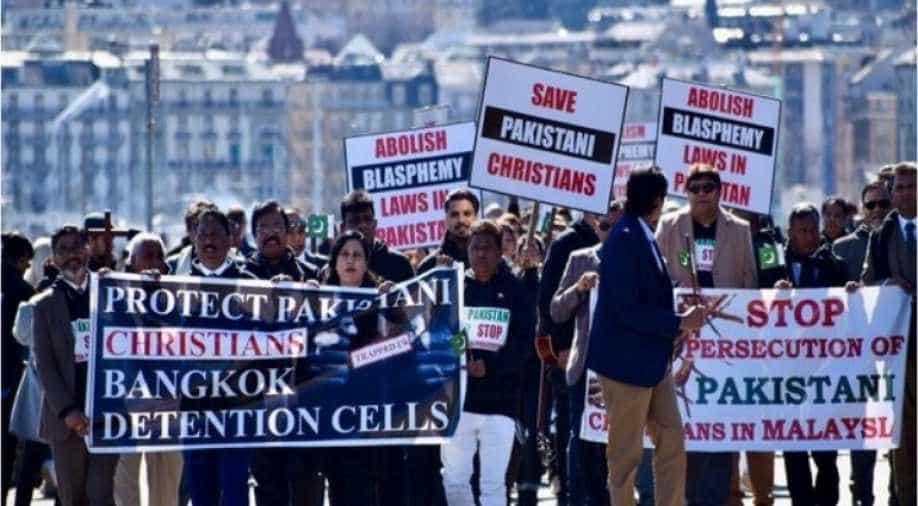 Christians make up less than two per cent of the population in Pakistan. Their numbers are decreasing as many of them are migrating to other countries for their safety. Photograph:( ANI )

Christians in Pakistan have been facing systematic persecution as not only their churches were being targetted but also girls who are being kidnapped and forcibly converted into Islam.

Pakistani Christians living in parts of Europe held a protest rally in Geneva to raise their voice against Islamic hardliners who are persecuting minorities in the name of blasphemy.

The protesters including women and children carried out a rally from Palais Wilson, the current headquarters of the Office of the United Nations High Commissioner for Human Rights to Broken Chair, during the 40th session of the UN Human Rights Council.

They demanded that the Pakistan government must abolish the 'dangerous' law misused by the state and non-state actors to target the minorities.

Frank John, a Pakistani Christian and Chairman of Drumchapel Asian Forum in NW Glasgow, said, "We are unhappy with the functioning of the government in Pakistan because the mindset of 'maulvis' towards Christians is immoral. Every day, atrocities are being committed against our children, especially girls, which is not acceptable. Our girls are being kidnapped by misusing PPC 295C and they are converted into Islam," He added.

"Every person in Pakistan is unhappy with Act 295C because we always remain in fear of its misuse. If we have an altercation with any person, they put us under PPC 295C. This is a dangerous law and needs to be abolished, " he said.

Christians in Pakistan have been facing systematic persecution as not only their churches were being targetted but also girls who are being kidnapped and forcibly converted into Islam.

Samuel Aziz, Head of Overseas Pakistani Christian Association in Germany said, "We are protesting here as we are not getting our rights in Pakistan because of fundamentalist forces."

He added, "We have a demand that this law (blasphemy) should be abolished. These incidents get exposed at international level. In the case of Asiya Bibi, we are thankful to the Supreme Court of Pakistan that she got justice because of the government's efforts. The government is not abolishing this law but is helping us to get justice. But, since there are fundamentalist forces, we are facing persecution."

Many members of European Parliamentarians and human rights activists also joined the protest by Pakistani Christians.

Dr Mario Silva, Executive Chairman of International Forum for Rights and Security said, "Pakistan systematically discriminates against minorities. Christians are particularly targetted by the blasphemy law. Christian persecution is a real threat to democracy and it's a real threat to human rights. It's something the world community needs to take a look at."

"I do believe what's happening is a slow genocide which will eventually eliminate all Christians from the country. Last, the government does something about the fundamentalism that spread into the system both in the education system, political system and social system in the country. It will never be able to fully functional democracy," He added.

"The state has a responsibility to protect its minorities rather destroying them. They have to go against the perpetrators of crimes against Christians. There are attacks on Christians, suicide bombings are taking place and the government is doing nothing to investigate the persecution of Christians in the country."

Christians make up less than two per cent of the population in Pakistan. Their numbers are decreasing as many of them are migrating to other countries for their safety.