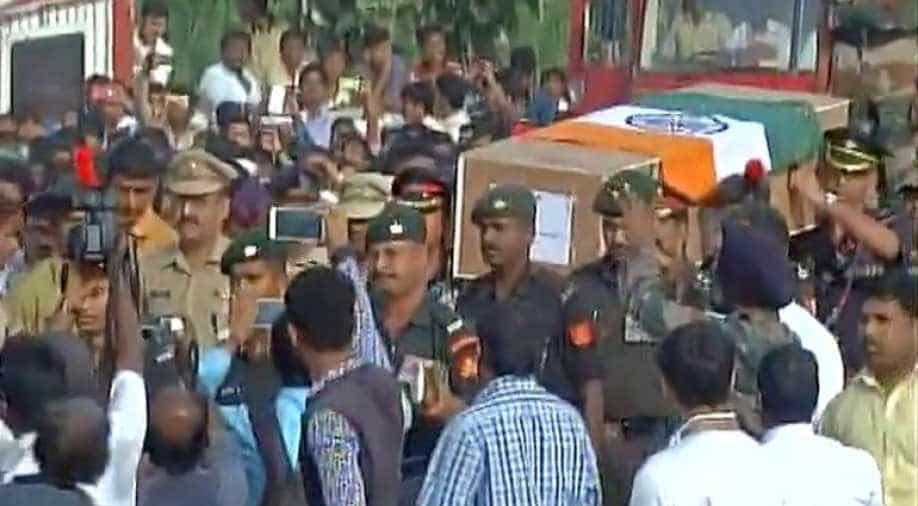 The last rites of Major Gosavi Kunal Mannadir were held in Pandharpur in Maharashtra. Photograph:( ANI )

The mortal remains of Major Kunal Manndadir Gosavi, who was among those killed in Tuesday's terrorist attack in Jammu's Nagrota, were today consigned to flames with full state honours at his home town of Pandharpur here.

His body was brought to the town in the morning. The pyre was lit by his father in the presence of a large number of people this evening.

The Major is survived by his wife Uma and his father.

In Bengaluru, tributes were paid to Major Akshay Girish Kumar, who also lost his life in the encounter. His mortal remains were brought to his hometown today.

Bengaluru: Tributes being paid to Major Akshay Girish Kumar, who lost his life in #nagrotaattack pic.twitter.com/HfORSRBuVo

Major Gosavi and Major Akshay Girish Kumar were among the seven army personnel who were killed while trying to fend off terrorists who attacked their camp in Nagrota.  The three terrorists, who were disguised as policemen, entered the residential quarters and held women and soldiers captive. They were ultimately shot to death.

The other soldiers who were martyred in the attack were Havildar Sukhraj Singh from Punjab, Lance Naik Sambhaji Yeshwantro from Maharashtra and  Naik Chittranjan Debbarma from Tripura.

The last rites of Grenadier Raghvendra Singh were held in Nanded today and were attended by Rajasthan chief minister Vasundhara Raje.

The last rites of rifleman Asin Rai, who was also martyred in the encounter, were held in Bagdogra in West Bengal.