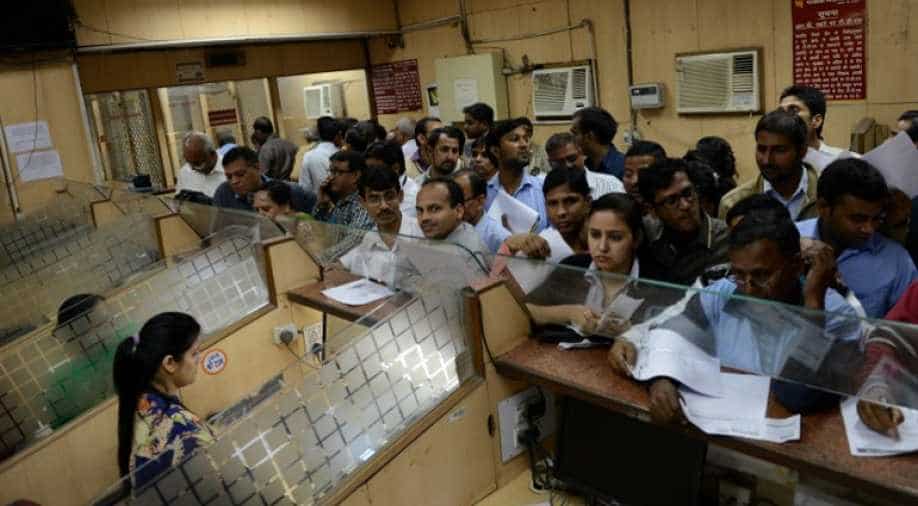 Only a few ATMs were working and most of them will be back in operation only tomorrow after the tedious job of removing the now-defunct bank notes is completed. Photograph:( AFP )

Huge rush and long serpentine queues were witnessed on Thursday at banks in India, which opened today after a day's break, as people jostled to exchange their 500- and 1,000-rupee notes for lower denomination bills to be able to pay for their basic needs.

With ATMs also shutting down soon after Indian Prime Minister Narendra Modi on Tuesday night announced the withdrawal of 500- and 1,000-rupee notes from circulation in a bid to flush out black money, citizens queued at banks to get the limited quota of cash that they are initially entitled to.

Only a few ATMs were working and most of them will be back in operation only tomorrow after the tedious job of removing the now-defunct bank notes and replacing them with lower denomination bills and new hard-to-fake Rs 500 and Rs 2,000 notes is completed.

People complained of having to wait for a long time before they could replace old higher denomination notes or withdraw from their bank accounts using pay-in slips or cheques.

People seemed excited after getting new Rs 2,000 notes from banks and clicked pictures holding the new banknotes in their hands.

Some, however, complained of the restrictions placed on exchanging OHD and withdrawals from the banks. Many felt the government should have done all preparations, including stocking ATMs, before announcing the decision.

Only a maximum of Rs 4,000 per person in cash irrespective of the size of the tender was being given per person after submission of valid identity proof. Anything over and above this value was credited to bank account.

Banks set up additional counters to change cash as also allow withdrawal from bank accounts through cheque or withdrawal slips with a ceiling of Rs 10,000 in a day within an overall limit of Rs 20,000 in a week (including withdrawals from ATMs) up to November 24.

Banks have been ordered to remain open on the weekend as well as function late till 9 PM for three days beginning today to deal with the huge rush.