In life and death, Mujibur Rahman continues to be a towering figure in Bangladesh 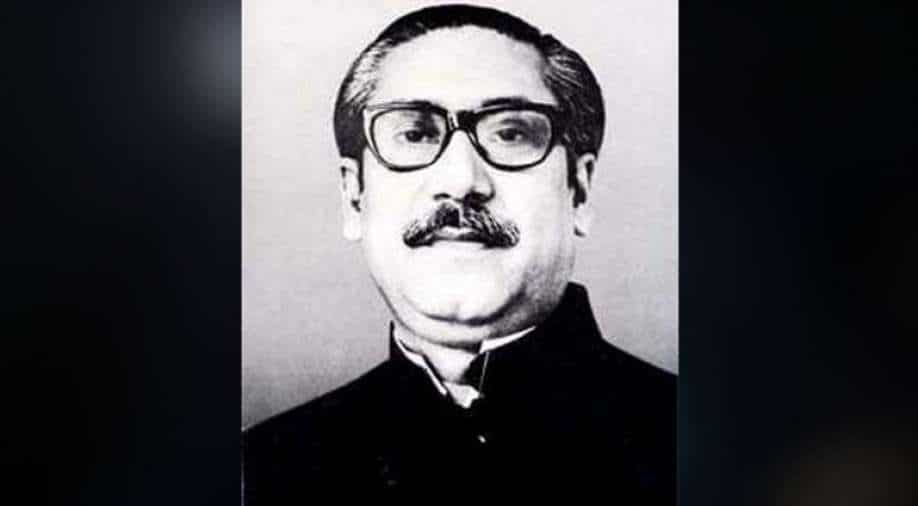 An undated government handout picture of Bangladesh's Sheikh Mujibur Rahman, the country's founding father, who was killed along with most of his family members in a military coup on 15 August 1975 Photograph:( AFP )

Mujibur led the independence struggle in former East Pakistan until March 25, 1971, when Pakistani troops whisked him away to then West Pakistan

A giant portrait of Bangladesh's founding leader Sheikh Mujibur Rahman made from rice paddies is drawing hundreds of visitors as the country gears up to celebrate its 50th anniversary of independence.

The 400 metre-long portrait of the father of Bangladesh's Prime Minister Sheikh Hasina was created from planting purple and green rice over 13 hectares (33 acres) of land.

Last year, Hasina unveiled plans for mass celebrations to mark the birth centenary of Mujibur Rahman, who was born on March 17, 1920, as well as the 50 years since the founding of Bangladesh.

Since then, hundreds of sculptures and murals of Sheikh Mujib have been appearing across the country.

Although the commemorations have been overshadowed by the coronavirus pandemic, the government has embarked on a mass building of murals and memorials to honour Sheikh Mujib.

This month, visits from the leaders of India, the Maldives and Nepal will kickstart the main celebration events.

Popularly known as Bangabandhu, Mujibur Rahman remains a towering figure in the South Asian nation, in life and death.

His story, which includes legal and political battles long after his demise, is intertwined with the history and politics of Bangladesh, the nation he founded.

Mujibur led the independence struggle in former East Pakistan until March 25, 1971, when Pakistani troops whisked him away to then West Pakistan.

He was interned there for nine months while his followers led the struggle for independence in a months-long guerrilla war, aided by India. The Mukti Bahini, also known as the Bangladesh Forces, was the resistance movement consisting of members of Bangladeshi military, paramilitary and civilians during the War of Liberation that led to the creation of Bangladesh in 1971.

Mujib came back home in January 1972 and took the reins of the war-ravaged country. But he was killed along with most members of his family by rebel army officers on August 15, 1975, setting the country on a long course of military rule.

Sheikh Hasina, one of Mujib’s two daughters who survived the family’s massacre because they were abroad at the time, returned home in 1981, took charge of his Awami League party and became prime minister in 1996.

She vowed to put her father’s killers on trial. Her government revoked the indemnity ordinance in 1996 and cleared the way for a trial of the assassins and coup leaders, beginning with a police complaint identifying 20 accused.

In 1998, a Dhaka judge handed down death sentences on 15 of the 20 accused, of whom only four were in custody. They appealed in the High Court against the verdict, the first of a series of appeals. Three convictions were eventually thrown out, but not for the four in custody.

Another of those convicted was jailed after being extradited from the United States in June 2008, subsequently joining in the appeals.

Between repeated appeals and governments less interested in the case than Hasina, who was out of power from 2001 until early 2009, those convicted remained in prison.

After lengthy hearings, the Supreme Court in November 2009 upheld the sentences on the five as well as six others still at large and believed to be outside the country. Another whose death sentence was upheld died abroad.