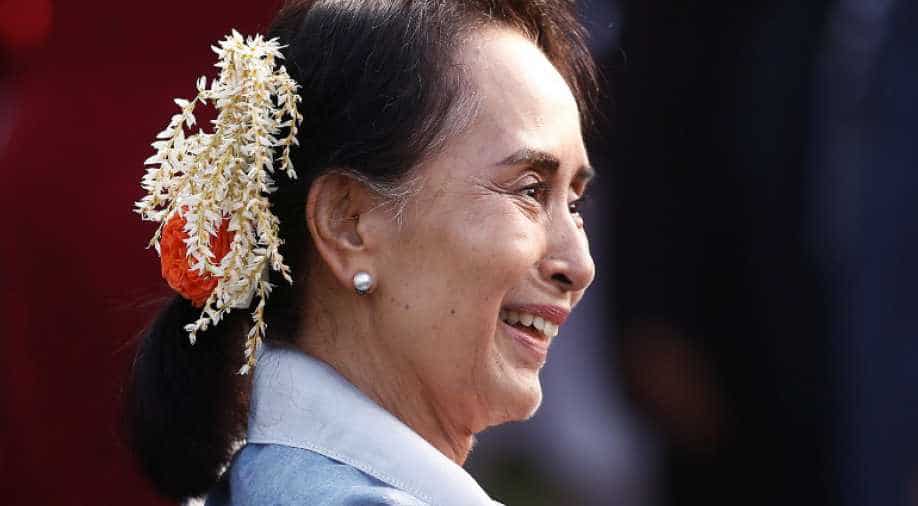 Suu Kyi's government said on Friday it did not want discuss the details of the exchange between Suu Kyi and Richardson any further. Photograph:( Reuters )

Aung San Suu Kyi remains Myanmar's best hope for change, veteran US mediator Bill Richardson said on Friday, days after he got into a fight with the Nobel laureate and quite an international panel advising her government on the Rohingya crisis.

Richardson said Suu Kyi - whom he described as a long-time friend - had developed a "siege mentality" in her position as Myanmar's State Counsellor, the country's civilian leader, but added that Western governments should continue to engage with her.

"The relationship with the West, with human rights groups, with the United Nations, with the international media is terrible," he told Reuters by phone from New Mexico on Friday.

"And I think Aung San Suu Kyi has brought this upon herself, the constant disparagement of the international community, which I think can be helpful to her ... She seems isolated. She doesn't travel much into the country. I think she's developed a classic bubble."

Richardson said he resigned from the advisory board on Wednesday, during its first visit to troubled Rakhine State, saying it was conducting a "whitewash". Suu Kyi's office said on Thursday her government had asked Richardson to step down and accused him of pursuing "his own agenda".

Suu Kyi's government said on Friday it did not want discuss the details of the exchange between Suu Kyi and Richardson any further.

Around 688,000 Rohingya Muslims have fled from Rakhine to Bangladesh in recent months to escape an army crackdown following insurgent attacks on security forces.

"I think the Myanmar military is to blame a lot and the only person that can turn them around, I believe, is Aung San Suu Kyi, and she should start doing that," said Richardson, a former US ambassador to the United Nations under President Bill Clinton who has also worked as a mediator with North Korea.

Richardson said he had informed the US ambassador in Yangon and the State Department of his intention to resign but had not sought their guidance.

Richardson said that before his trip to Myanmar, he spoke to US Secretary of State Rex Tillerson, who visited the country in November. "He called me and gave me a briefing on his visit and that was all," he told Reuters in a separate television interview.

A State Department spokesman said he could not immediately confirm details of Richardson's contacts.

A statement on Thursday from the nine remaining members of the advisory board said they met this week "with open minds" and rejected Richardson's criticism that he feared the panel would be used as "a cheerleading squad".

Richardson said Suu Kyi's response at a Monday night dinner was "furious" when he brought up the case of two Reuters reporters, who were arrested on Dec. 12 on suspicion of violatingMyanmar's Official Secrets Act.

"She was very angry with me when I raised releasing the journalists, giving them a fair trial," he said.

"She was upset when I said there should be an investigation of the mass-graves issue, that they had to increase their international support for the treatment of the Rohingyas, the terrible refugee crisis. She exploded. She was very unhappy, and it shows that she didn't want to hear frank advice."

Her office said it would not be commenting further on the exchange.

"We already published a statement and also the advisory board published a statement. The judge will decide whether the journalists committed the crime or not. It is Contempt of Court. Even in America, they wouldn't involve themselves in a case while the case is ongoing in a court hearing," said Zaw Htay, Suu Kyi's spokesman.

Reporters Wa Lone, 31, and Kyaw Soe Oo, 27, had worked on Reuters coverage of the crisis in Rakhine.

Richardson said it was important for Western governments, the United Nations and Suu Kyi to enter into a new dialogue "to try to help each other, not to keep fighting each other" before any thoughts of new sanctions on Myanmar.

"What we don't want is to have Aung San Suu Kyi just listen to ASEAN countries, China or Russia. They need engagement with the West. We're all former friends. She needs to change, and perhaps the West needs to give her another chance and not impose sanctions."

Myanmar's armed forces have been accused by Rohingya witnesses and human rights activists of carrying out killings, rapes and arson in Rakhine in a campaign senior officials in the United Nations and United States have described as ethnic cleansing. Myanmar rejects that label and has denied nearly all the allegations.

Bangladesh and Myanmar agreed earlier this month to complete the voluntary repatriation of all the refugees. The remaining members of the advisory board on Wednesday toured temporary camps the government has set up for returnees.

Richardson said he did not believe conditions were yet right for the repatriation process to begin.

"I believe that the Myanmar government has emphasised speed instead of systems," he said. "There's been too much emphasis on quick results rather than assuring that safety is guaranteed."