Desperate for cash, Afghans toil in mines that are deadlier than ever 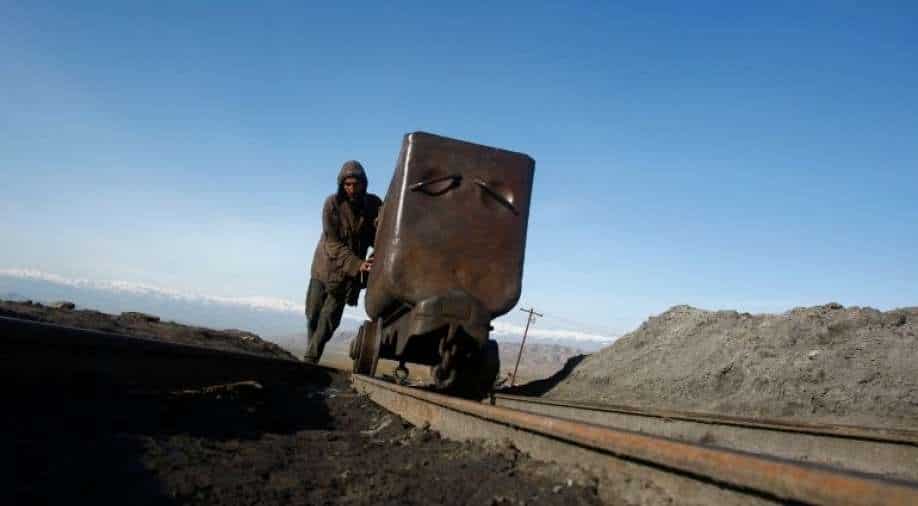 An Afghan miner pushes a wagon at the Karkar coal mine in Pul-i-Kumri, about 170km north of Kabul Photograph:( Reuters )

The backbreaking work offers a few dollars a day, just enough to buy bread and tea for families to survive

Choking on dust, Mir Abdul Hadi emerged from the narrow mine shaft with a sack of coal hanging heavy on his back and his skin stained black. For hours he had hacked away at the coal in the dark tunnel, terrified it might collapse on him, and now he was relieved to step back into sunlight.

Hadi, 29, a former government soldier, was among thousands who flocked to northern Afghanistan’s notoriously dangerous mines after the Taliban seized power last year — desperate to scrape out a living amid an economy in ruins.

The backbreaking work offers a few dollars a day, just enough to buy bread and tea for his family to survive. But it comes at a steep price: Since he arrived in October, three mines on this mountain have caved in. The latest collapse last month killed 10 miners, all of whom suffocated after being trapped inside a mine shaft for days.

“That night I wanted to leave this job, to never come back to the mines,” Hadi said. “But then I went home and saw there was nothing to eat.”

For more than six months, Afghanistan has been gripped by a devastating economic crisis that has wiped out incomes, sent food prices soaring and left millions hungry. Now, desperate to make ends meet, many Afghans are going to increasingly drastic lengths to survive.

Families in rural areas have repaid debts with children they cannot afford to feed, selling them to better-off families or local bosses. In the northwestern city of Herat, men have sold their kidneys on the black market. And along the Iranian border, thousands looking for work abroad have endured brutal beatings by security forces.

In the Chinarak mines of Baghlan province, a mountainous slice of northern Afghanistan, three times as many men have come to work in recent months than before the Taliban takeover, according to mine operators. They are former soldiers and policemen, nongovernmental organization workers and shopkeepers, among the millions who have lost their incomes in recent months.

For decades, the informal mining operation has been a risky option for impoverished villagers desperate to earn a few dollars a day. Around 200 people have died in the mines since coal was discovered here 50 years ago, according to village elders.

But the mines have become even more deadly since the Taliban seized power, miners say. Unlike the previous government, the Taliban have not supplied engineers to monitor toxic gas, or timber to support tunnels that stretch for hundreds of yards. The result is a deadly combination of less structurally sound mines and inexperienced miners who cannot spot signs of danger.

“The economic situation is forcing everyone here, but they know they could die. It’s more dangerous than ever,” said one miner, Baz Mohammad, 35, who has worked in the mines since he was 15. “If I had some money, I wouldn’t stay here for another second.”

The work at Chinarak begins at dawn, when the taste of smoke from wood-burning stoves hangs heavy in the air and the morning fog paints the foothills in a cloudlike haze. Carrying shovels and pickaxes, miners make their way down the winding path of reddish clay to the coal-filled mountain.

From the base of the mountain, a trail of blackened earth — a sign of coal — zigzags across its face like a treasure map. Strapping on headlamps, the men duck into mine openings scattered across the hillside and crawl through subterranean tunnels that stretch as far as 300 yards.

Sitting on a boulder outside one mine, Zahir Kazimi, 33, said he could barely move his body after his first day at the mines in January. A tailor by trade, Kazimi went to work in sewing shops at age 13 — determined to save up the money to marry a girl he liked. A decade later, he married and opened his own tailor shop. He was happy then, he said.

But after the Taliban seized power, his once steady stream of clients dried up, and soon his savings did, too. So he took his brother’s donkey to the mines and joined the throng of sweaty men with black dust caked into their skin. Twelve hours later, he returned home with his back aching and cursing himself for getting married at all — if he were single, he would not have to earn so much to feed four mouths at home.

<em>“</em>If you come here and work, you can get some money to buy food for your family. If not, they will go hungry,” Kazimi said. “There is no other way to go. We must work.”

Standing outside a mine’s entrance, Hadi, the former soldier, wiped his hand on his shirt and looked at his calloused palm. His father, a farmer, always chided him to go to school as a child, dreaming that one day his son could become a district governor or a commander. For a while, Hadi hoped he could, too. At 18, he joined the Afghan National Army and earned a decent salary.

But jobless and broke after the former government collapsed, he sold the large carpet in his living room and used the money to buy a donkey he could take to the mines. Inside the dark tunnels, he works through the pain that shoots through his back and arms as he slams a pickax into the wall of coal over and over and over again.

The labor is grueling, he says, but even worse is the fear: the fear of choking on toxic gas, the fear that the rock hitting your back is the start of a collapse, the fear of being buried alive with no hope of rescue.

“Every time I go in the tunnel, I’m afraid,” Hadi said. “When I’m picking coal, I’m always telling myself this is the last one for today.”

By midday at Chinarak, the mines are buzzing with hundreds of miners — some old men in their 60s, some children barely 10. As they work, the sounds echo down the mountain: the thuds of men dropping satchels of coal on the ground. The hiss of coal pouring out of the bags. The clucks from children coaxing donkeys carrying loads of coal down the mountain.

The coal is loaded onto trucks that head down the rough road to a Taliban checkpoint, a single-story building that overlooks a large riverbed and the mountain range’s snow-covered peaks. The building once belonged to businessmen who operated these mines in mafia-like arrangements with the previous government. At that time, trucks of coal leaving the mines would be taxed first by those companies, and then again by the Taliban, who levied informal taxes to fund their insurgency.

Since seizing power, Taliban officials say they have driven out those strongmen and “nationalized” the mining industry. Abid Atullah, the Taliban’s manager of mines in the Nahrain district, said they collected $16,000 to $30,000 in tax revenue from the Chinarak mines each day — a modest but welcome revenue stream for the cash-strapped government.

Still, miners complain about the lack of government support. For months, their petitions to the local government to provide engineers, oxygen tanks, toxic-gas meters and wooden support beams have gone unanswered, they say. Some who informally run the mines have purchased the timber themselves — cutting miners’ daily wages by around 40% to afford it. Others have forgone it, forcing miners to dig narrower tunnels that are harder to work in and not structurally sound.

The collapse of a mine last month epitomized the heightened risks: Miners said inexperienced workers had extended the tunnel too far, and that there were not any beams to support it. For two days, nearly everyone on the mountain helped try to break through the wall of earth that trapped nearly two dozen miners inside, driven by the men’s muffled cries for help. Seventeen hours in, their voices faded as the oxygen ran out. No one made it.

Their fate haunts the men who have to keep returning.

Emerging from a mine entrance, Taza, 30, slammed the bag of coal on the ground and let out a loud cough. A policeman under the former government, and a father of six, he began working in the mines in September, despite all the horrific stories he grew up with about how many ways there were to die there.

Weeks later, he learned the dangers for himself: Inside a tunnel, he began to feel hot and his head oddly heavy. Within minutes his lungs seized up — a symptom of inhaling the toxic gas that was slowly filling the tunnel. Dropping his sack of coal, he dashed to the mine’s entrance and collapsed on the ground.

A few days later, he went back to the mountain.