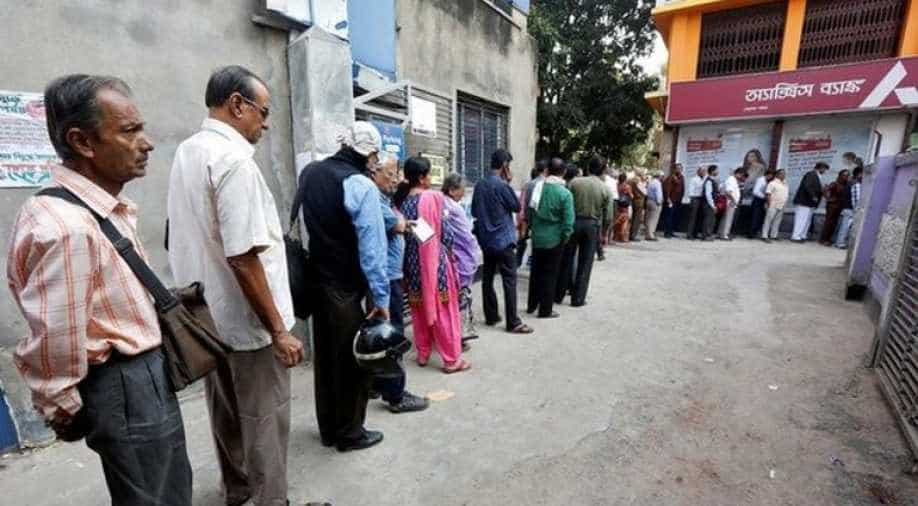 Even this morning, Mumbaikars and people living on the city outskirts were seen queueing up outside banks and ATMs to meet their monthly payments. Many were upset about banks refusing payments to customers due to cash shortage. Photograph:( Reuters )

A month after the demonetisation decision, people across the metropolis and adjoining areas are still struggling to lay hands on cash, adversely affecting their monthly payments and businesses.

The main reason behind these hardships, according to people PTI spoke to, are the dysfunctional ATMs that continue to remain dry even a month after the government scrapped notes of Rs 500 and Rs 1000 on November 8.

"Prime Minister Narendra Modi is appealing to everyone to adopt cashless methods to make small or big deals. Going by this, why do we need so many ATMs across the country? Uproot them. These are not useful anyway. These ATMs have gone cashless," said an irked Kalpesh Jain, a cloth trader in suburban Ghatkopar here.

Even this morning, Mumbaikars and people living on the city outskirts were seen queueing up outside banks and ATMs to meet their monthly payments. Many were upset about banks also refusing payments to customers due to cash shortage.

Waris Sheikh, a professional working in Lower Parel area said, "Since last two days, a bank branch in the Kamla Mill compound has stopped giving cash. There is a board outside the office saying we are taking deposits only."

A homemaker from neighbouring Thane district, Vimala Tripathi, who also sounded frustrated, said, "One month has gone by but there has been no significant improvement in the circulation of money. We still have to stand in long queues in banks and ATMs where there is no cash."

Another homemaker, Sunita from suburban Bhayandar, said, "The latest gift by the government is the Rs 2000 note which cannot be used to buy milk, bread, fruits or vegetables. One month's time was enough to wipe out the shortage of lower denomination notes in the market".

Traders also complained that their business has suffered by over 40 to 50 per cent as demonetisation has badly hit the purchasing power of the people, even as the government continues to make a push for cashless options.

A restaurant owner in Ghatkopar said, "Unfortunately, people have not been so enthusiastic to pay by Paytm or Freecharge or whatever. Many of them come at my restaurant with a Rs 2000 note, whom we have to turn away."

However, there are some who are still hopeful that all these troubles would end soon as promised by Modi who had urged people to cooperate with the government till December 31.

"Modiji had sought 50 days, and now 30 days have passed. We should give him 20 more days and hopefully wait for the situation to improve. But the sad part is that even after 30 days there is hardly any improvement," a tea-seller from suburban Andheri said.